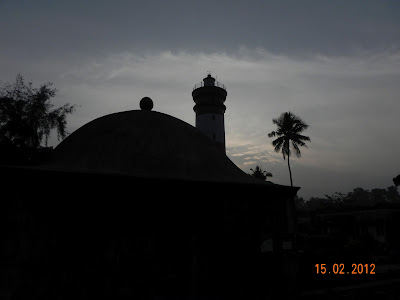 (Lighthouse, Alleppey beach)
Six months - it may not be such a long period in a life that has been around for nearly 55 years, but this unsolicited soujourn in this town, whether I am destined to live here for many more months or years, will carry its indelible marks in my memory.
My routine is terrible - from 0900 hrs to 1900 hrs in the office, the solitary ride to my room at the YMCA, the distracted, indifferent browsing through the books, watching a movie in the Netbook, staring up at the wall, fitful sleep - the only time I can be said to be nearly happy is in the morning when I take out my bicycle and roam around the town or go to the beach.
If there is beauty in decay, that is Alleppey. The degenerating shambles of Godowns and old buildings, the stagnant, water-hyacinth choked canals, the unsophisticated people with rude accent, the absurdity that Class Struggle and Communisim has become, to which Alleppey was the cradle; yet, on the western and eastern sides of the town, the skies open up to brilliant blue, the sea and the backwaters glitter in shimmering silk - and I feel a bit rested, thinking it could've been worse. In spite of the stereotypical images that most non-Alleppey-ans have of Alleppey - the mosquito-ridden, water-scarce, filth-flooded - actually, the present Alleppey is comparatively cleaner than many places I have seen; mosquitoes and water, Trivandrum is nearly as bad. There a kind of quiet, raw, guileless charm to this little town.
I miss Trivandrum. I miss my home. I miss my family. I miss my friend, Doc KVS and the evenings with him. Perhaps once in a while, we all should be kept away from things we love - ah, but not too far away, just out of reach...!
Every day is meticulously counted; the calendar is scoured finely for that elusive mid-week holiday.
I began this post to show you a few more pictures of Alleppey - I am building up a portfolio of the town. These are recent samples. 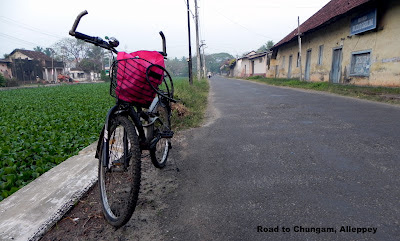 There are quiet, peaceable lanes and streets in Alleppey; more so, at early mornings. Maybe it is contagious, I feel the same tired, deflated dullness of the streets. There is a sense of resignation to fate - in   both the town and in me. 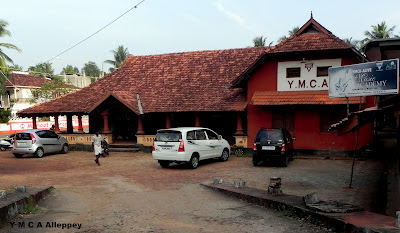 This is the facade of the YMCA, where I have spent the last 6 months. My room is behind this building ( foundation stone laid in 1912 AD) in a modern block. Every evening as I trudge back, I see a group of members sitting around a table in the verandah, playing cards. 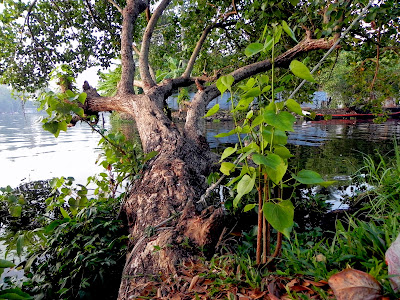 I don't know why I took this picture; there is nothing significant about it, except perhaps the way it leans over the water. But this tree and many other seemingly ordinary scenes connect to me ( or rather I connect to them) in a strange way. There is something pathetic, something desperate about it that I jell with. 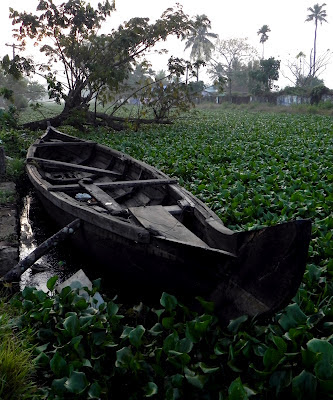 So too for this boat. Boats, moored, still and solitary - again, the strange stirrings in my heart... 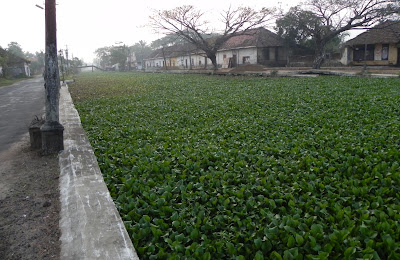 On either sides of the canals, buildings such as this Godown, slumber. In the not too long ago past, such places bristled with activity and exuded fragrances of a thousand kind. Fresh spices brought down from the hill districts were stored here and awaited export to exotic faraway lands.  I keep a respectful distance, unwilling to disturb them; they are on their last stretches - soon, multi-storied constructions will come up on their graves. 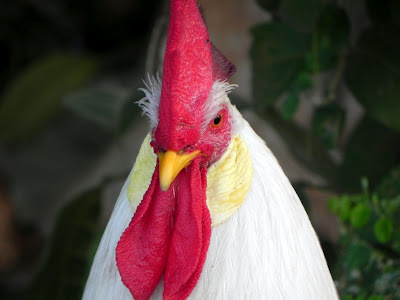 I have always been fascinated by the male of the fowl, Mr.Cock. How vain, how pompous, how so he looks like an old-world Englishman with jowls and double chins and dressed up for dinner! How funny it is to see him strut in such self-importance! How so much he seems to be burdened with responsibilities! He never seems to eat, but cuk-cuk-cuk he says and points out a delectable worm to his consorts! He looks around, he looks at you in the eye, daring you to fight, but ready to take to flight at the slightest hint! Yet - I sense loneliness, world-weariness in him. 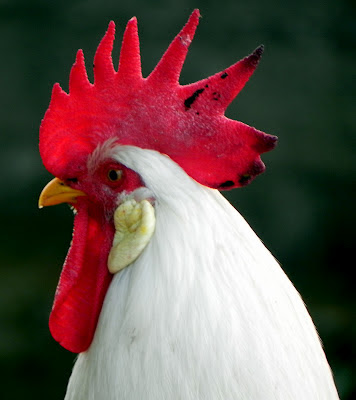 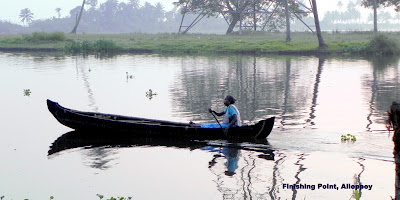 The quintessential  Kuttanad. Where else would you see an old woman casually rowing away in a boat? 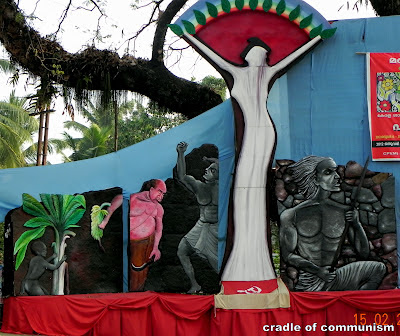 Malayalees might recognize the story. The poem, Vazhakkula, by Changampuzha, written in 1934.  It is the story of the untouchable tenant farmer who nurtured a plantain in his little backyard. His children dream of the day when the fruits will ripen. But the landlord ( note the sacred thread!) arrives and snatches it away because the land belonged to him.  The revolt against the feudalism that was rampant in Kerala began there. 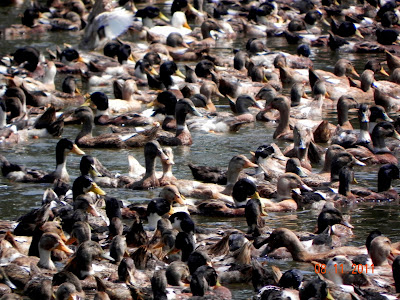 Ducks are synonymous with Alleppey and Kuttanad. In my teens at Mavelikkara in the Seventies, flocks of ducks would swoop down on the post- harvested paddy fields. Those were pre-insecticide days. There would be abundant frogs and fish and all sorts of things to gobble up. For the paddyfield owners, the payment was in eggs! For every Para ( a measure of area of paddy field) they would give so much eggs.  Boy! Those were the days! 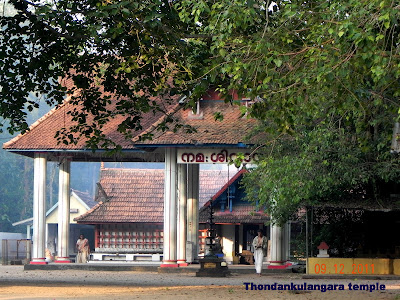 Thondankulangara Mahadevar Temple. It has a large compound and huge trees. There never seem to be the typical temple-going crowd here; in fact, it is never crowded.  Yet to be tainted, it seems, with the colour of money. 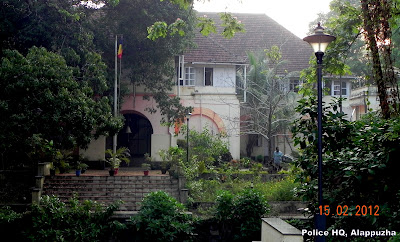 Note the huge bell. This is the district Police HQ. The man in the right foreground has a Police dog, a Labrador Retriever, with him.  This is another relic from the colonial past. Those British buggers had it real good, didn't they? 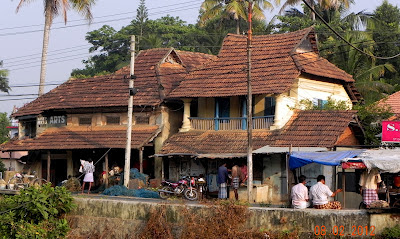 Believe me, there are times when I feel that I have been transported back in time, to the 1960s of my boyhood. Barring the motorbike, this is an ageless scene. This is classical Kerala. 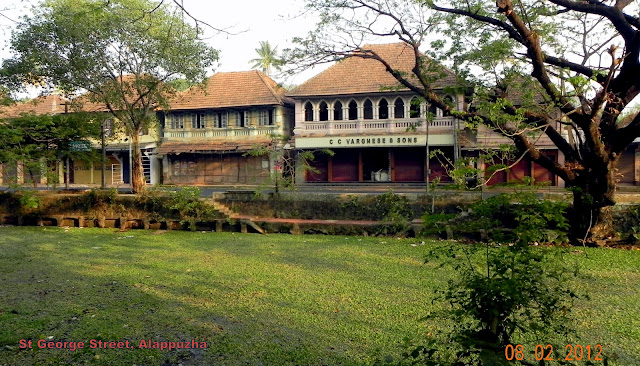 Another beautiful part of Alleppey. I cannot convey the serenity of the mornings.  I gaze at the old town and realize that I have to make peace with her. I am just a passer-by who will disappear in no time, but Alleppey is eternal. Alleppians make wry faces;  yeah, until Sunami hits! 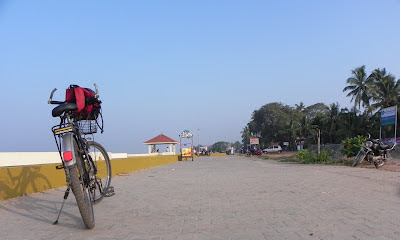 Wherever I may go in Alleppey, my bicycle would finally lead me to the beach. The road to tranquility. Peace.