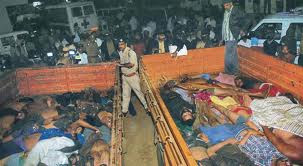 A most hypocritical, contemptible description about Kerala is ‘God’s own Country’. Time and again the state has proved that its natural beauty is a façade, an ironical joke; the people and their elected governments are as evil as they come. The latest incident that underlines this, is the accident that took the lives of more than 110 people at Sabarimala. While the usual blame-games and drama are being carried out with élan, while the whole issue will die within a week, shall we look at the root cause of the accident and how the entire people of a state stand accused of committing duplicity and mass murder?

The Makara vilakku, or Makara Jyothis that appears in the ‘sky’ at Sabari mala, is a hoax that has been perpetrated jointly by the 4 departments of Govt. of Kerala; the departments of Forests, Electricity, Devaswom and Police since decades. From the original story of ‘tribals’ lighting the light, the successive governments that has ruled Kerala has stood by and gave clandestine support to the hoax. About 25-30 years ago, a group of Rationalists went up the hill called ‘Ponnambalamedu’ and lit a dozen ‘Makara Jyothis’ simultaneously with the official one. All the Rationalists were caught and beaten up by the authorities. Since then security has been beefed up here; no body can enter the region without permission. 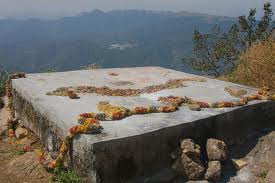 The picture shows the platform on which sacks of Camphor is dumped and lit. Wet jute cloth is flapped over the lit camphor twice or thrice to make it appear as twinkling star for the hundreds of thousands of believers who throng the temple area far below; among those were the devotees who were trampled to death a few days back.

Those who can read Malayalam, please see http://www.tattamangalam.com/images/makara-jyothi.JPG 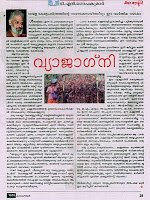 BLOOD MONEY. SHAME ON EVERY MALAYALEE FOR CHEATING HIS FELLOW COUNTRYMEN, THE POOR DEVOTEES FROM TAMILNADU, ANDHRA PRADESH AND KARNATAKA WHO ARE DUPED , DEFRAUDED AND FINALLY DEPRIVED OF THEIR LIVES.

The intellectuals are silent; the media is silent; the human right activists are silent. I hear their gurgle as they drink the blood of the dead devotees.

I look at the pictures of the dead in silence. May, if there is one, no God, forgive those in power who continue to allow the Makara vilakku to be lit. 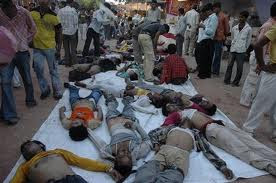