A roof over their heads 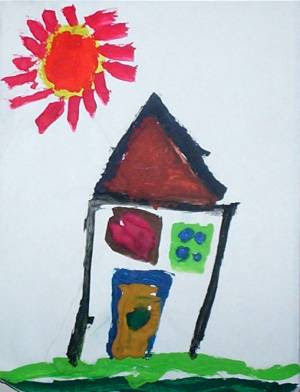 I have seen it many times, the silent communication between a couple. Sunithakumari glances at her husband, Shaji; he swiftly moves towards her and she passes something from her clenched fist to his. As I say goodbye, Shaji comes closer and says - ' ith irrikkatte sarrae' ( Please keep this, Sir) and grabs my hand and tries to thrust the contents of his fist - before even touching it, I could see what it was - two or three currency notes of Rs.100/-.
I was the innards of Alleppey town, inspecting sites of prospective borrowers for housing loans. The govt had introduced a new scheme for the urban poor - Interest Subsidy Housing scheme for the Urban Poor - a subsidy of 5% less than the normal rate. As most of the applicants are either BPL ( Below Poverty Line) or EWS ( Economically Weaker Sections), the maximum loan that we were giving is Rs.1,60,000/- per applicant. Even though the quantum of amount is small, the work involved in processing a loan application is as same as a big loan. Bankers, understaffed and underpaid, curse under their breaths at the heavy load of work. I, for eg., have to process 57 applications within a month, that too amidst all the other duties I have.
But I enjoy it. It gives me immense pleasure to interact with these poor people, listen to them, discussing with them and be an instrument that provides succour. I tease their children, admire their little things, nod in agreement with their views; I am a tool, a catalyst in the realisation of their dream, their dream of having a roof over their heads. What I give is more than a little financial help; I give them dignity and self-respect.
" You extend your hand again and I am going to tear your application into two, do you understand?'. You offer me that bribe again and I will ensure that you never get a loan from anywhere'. Sunithakumari is aghast. 'Sir', she says, ' but everybody takes it, Sir, please don't be offended'. 'Maybe they do', I said, 'but not me'.
These are ordinary people; autorickshaw drivers, tailors, manual labourers, plumbers, workers in the coir factories, unpaid volunteers in the SHG programmes like Kudumbasree. People we might interact with everyday, casually. We would bicker and fight with them for the extra 5 or 10 rupees they charge, we would mourn how lazy and crafty they are. People whom we would like to forget. Yet, in Kerala, there is at present a silent revolution going on. Individuals and families who eke out a life are now supported by govt sponsored finance. Grass- root level neighbourhood groups are formed ( Kudumba sree / janasree) and involve in income-generating activities. The large majority of the members are women, who were till now mere housewives with no income of their own. These programmes have been very successful in empowering these women and giving them not only an income, but more importantly self-respect. Of course, there might be cheats and frauds among them, but in my experience with the poorer of our economic classes, I have found  more honest people among them than in  the middle classes.
Below are a few pictures of these families. They have built their dream houses till this level using their own funds and also with financial aids from the govt. And I - I am the last brush which would give their houses a coat of colour; and hopefully to their lives too. 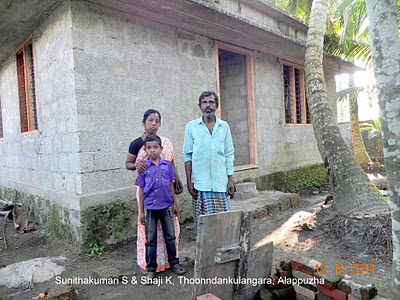 Shaji is a manual labourer; Sunitha is a housemaid. A daughter studies for BSc Nursing, and the kid in 6th standard. 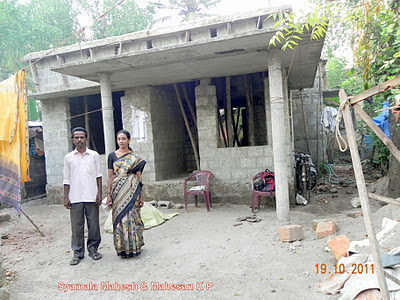 Mahesan is a tailor. Shyamala has studied up to Pre-degree and passed with First class but could not study further because her parents could not afford it. She works as a volunteer for SHGs, literacy programmes and in the National Rural Health Mission - unpaid. Their son is studying for BSc Chemistry. Mahesan proudly tells me that his son had a rank of 4000 in the Engg entrance, but they could not afford to pay the capitation fee. He says the boy is trying again, to get a higher rank so that he can get admission in Merit quota. 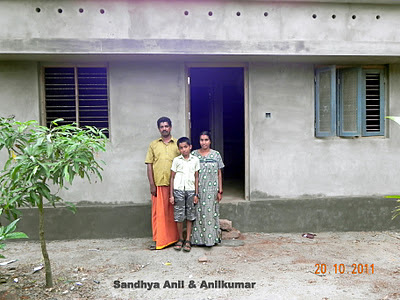 Anil is an autorickshaw driver. When he says he own his Auto and that he has fully repaid the loan for it, I can sense the quiet pride in his voice. Sandhya is a graceful, pretty woman; she supplements the family income by stitching Churidars and Nighties and blouses. I tell her about Parvati designing sarees and how she makes extra money with that. Sandhya is open-mouthed and asks me the details. That kid is a smart and lovable fellow. Sarala works in the local coir factory. Sreekumar is a house painter. They have only one son - he is studying for CA. I explain the scheme to the boy and discuss bank auditing with him. The parents look on, proudly, how the 'Big Bank Sir' and their son talk in equal terms. 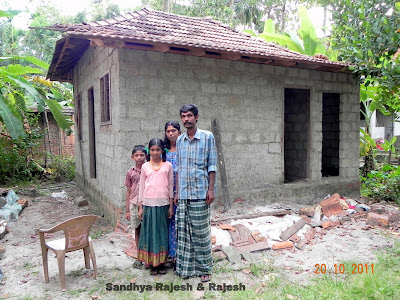 Rajesh is an artist. He designs and paints hoardings, works part-time in a shop that makes Flexboards. Sandhya - the way she looks at me, I feel her awe and a kind of worshipful admiration. Two kids, very intelligent and well-behaved.
I have met many more of these people. Each is a story of brave survival, a story of courage in adverse economic circumstances and misery. In their eyes I see the hope and dreams of bettering their lives. When I tell them yes, we will sanction the loan next week, I see that sparkle in their eyes and they have the most beautiful smile I have seen.
They have the confidence and the will; all they need is a little support, a few kind words, and concern and respect. Kerala is on the rise!
***************** Balachandran V, Alappuzha, 21.10.2011
Posted by Balachandran V at Saturday, October 22, 2011