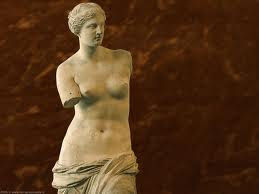 The post is not about the famous sculpture, Venus de Milo; nor is it about the book by Charles Devereaux. It is about Venus Pencils, which was suddenly brought back from the past while reading another blog.

This post is for 'NRI Girl'. I was inspired to do a ride back in time because of her post, ‘Pencil Memories’ - http://hephzibahisrael.blogspot.com/2010/11/pencil-memories.html

Two of my three sisters who were elder to me by 13 and 4 years, studied Zoology at their graduate level; one of them to the PG level. Now when I look back, I realize that they didn’t have any interest in the subject of Zoology per se. On the other hand, when I wanted to take up 2nd group for my Pre-degree (no ambition for ‘medicine’ – I was intrigued by Zoology), they vehemently opposed and derided me saying ‘you cannot draw a single record!’ They said it so triumphantly and finally that I wilted - so did my dreams of becoming a wildlife biologist. I felt they were saying the truth. Looking through their ‘Phylum – Chordata’ I would shiver- I could never draw like them. Though under strict orders NEVER TOUCH MY RECORD BOOK!, I used to peep into their record sheets, marveling at the intricate, delicate drawings of strange creatures and beautiful plants with romantic but unpronounceable names.

It is so easy to kill children, isn’t it? More so, in our younger days when the words of the elders were final. Like, when I wanted to study English Literature for my graduate class, they scoffed – ‘What? English? What you going to be? School teacher? Ha!’

The drawings, delicate. On their tables was this special box of pencils that they guarded fiercely. The metal box said, ‘Venus Pencils Made in ’. Young readers cannot imagine the kind of awe we had in the 1960s for things foreign. Though I used to pour for hours over ‘LIFE’ and ‘National Geographic’, I secretly believed that such places and people never existed – it was kind of a Maya, an illusion, I had thought.

But the Venus pencils. That green, crackled design on the skin! Some would come topped with erasers. Some had white plastic caps. As a small boy, I played with the empty metal pencil boxes – they were my buses. I was never ever to TOUCH the pencils, they are soooo expensive! When no one else was around, I used to gaze fixedly at the partly nude Venus de Milo. Probably I had a fixation on mammary glands… 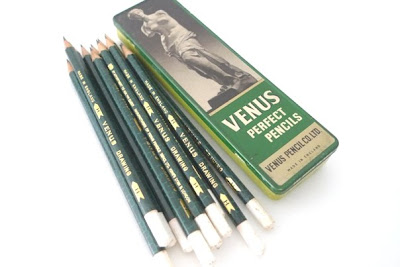 After leaving a comment at NRI Girl’s blog, I google Venus Pencils.

Those who would like read a brief history of Venus Pencils – go on.

The Company was founded in , in the in 1861 by Edward Weissenborn who had learned the art of pencil making in and realised that t was a great future in the for quality pencils, many of which had hitherto been imported from .
In 1865 the Company became the American Lead Pencil Co. and was the first firm in the to manufacture a complete range of graded lead pencils. Edward Weissenborn designed and built all of his own machinery and took out over 28 Patents for pencil making machinery.
The Reckford family acquired the Company in 1885, Reckford's previously having pioneered the importation of German pencils.
In 1905 the Venus de Milo statue in the Louvre was adopted as the Company's Trade mark. This required a certain amount of behind the scenes manoeuvring as the French Government had always forbidden the photographing and commercial use of Michelangelo's work of art. About this time the distinctive crackle finish was adopted. This unique design came about quite by accident but has remained a feature immediately recognised the world over and is undoubtedly the envy of other pencil makers who have searched incessantly for some similar distinctive feature.
By 1895 Venus Brand pencils were already being used in and in 1906 a London Sales Office was opened in , with a view to selling more Goods within the British Empire, direct sales from the being restricted due to Tariff Barriers.
Manufacture of Venus pencils in the started in 1910 at the newly acquired factory in in , the London Sales Office also being relocated to that site. From 1915 to 1918 the plant and workforce were employed on the production of munitions and pencil production recommenced at the end of the First World War. In this same year the British Company was incorporated as Alpco Pencil Company and so remained until 1933, when the name was wisely changed to Venus Pencil Co. to ensure that Overseas buyers were aware that the goods being sold to them were entirely British made.
1946 saw Venus commence to produce the newly invented Ball Point Pens.
The British Company continued to expand and, up to 1958, it remained in the ownership of the Reckford family. However the male adult family members had all deceased in the late 1950's leaving their shares in trust to their widows and children and this led to the sale of the entire Company Worldwide to a cosmetic corporation - Charles of the Ritz. This was an unsuccessful ownership and in *9Venus was acquired by Laird & Co. of New York.
Negotiations with the Greater London Council and the King's Lynn Borough Council in 1966 led to the move from in June 1967 to a site and a purpose built factory on the Hardwick Industrial estate.
Production of Fibre Tips and Markers were transferred from in the Summer of 1971. The takeover by Eagle Pencils at that time saw the move of pencil production to Tottenham early in 1972 to free space for the move of the Injection Moulding equipment from .
The move of the Margros Art and Craft materials production equipment from Woking to King's Lynn in 1973 meant that work space again became very limited and an extension to the original building was opened in early 1974 becoming the Finishe...

In 1956, the American Lead Pencil Company officially changed their name to the Venus Pen and Pencil Corporation, thus turning their fifty-one-year-old product into the company name. After some acquirements the company name was changed to Venus-Esterbrook in 1967. In 1973, the company was bought out by Faber-Castell and their name was changed for the last time to the Faber-Castell Corporation. This ended use of the Venus name and trademark.