The Truth about the Tornado 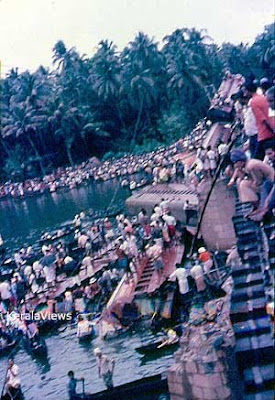 July 8, 1988. My friend lost her husband on that day, in the notorious Peruman train accident, which took 105 lives. It shocked Kerala.

Excerpt from a news report : In the Peruman Train Tragedy, the - Express train derailed on the Peruman bridge over , near Perinadu, Kollam, and fell into the lake, killing 105 people on July 8, 1988.
Officials say the cause for the accident was a Tornado. But still the cause of accident remain a mystery. Ten bogie carriages of the Island Express fell into , and more than 200 persons were seriously injured.
The Peruman Train Tragedy is one of the largest train tragedies in the history of the Indian state of Kerala.
The 'bogies of death' still remain on the bank of the Ashtamundi lake haunting the memory of many a rail traveller who passes through the near Quilon from where nine bogies of the Express plunged into the lake.

There were enquiry commissions and a lot of hue and cry. The final verdict was that the accident was caused by a ‘tornado’! Kerala laughed cynically. Nothing like that had happened there. Eyewitness accounts were smothered. Public outcry died soon. The bereaved were left alone, their private sorrow leaving unhealed, open wounds…


Yesterday I met a few old friends who work in the Railways. We had met last year after 45 years, in a reunion of friends who had studied together at the Railway Primary School, Palakkad. Over a few drinks, we talked about the Peruman tragedy.

“Tornado? What a laugh! You want to know the truth? Maintenance work was going on on the bridge. They had called up the nearest station and enquired about the passing trains. They were told that the Island Express which was due to pass then is late by an hour or so. The workers had lifted a rail, delinked it and the repair went on. Then they went for a tea break, leaving the separated rail, assured that the train was not due. They were wrong; the train kept the right time. In the enquiry commission set up by the government, they quashed the eyewitness accounts, the accounts of the workers themselves. It was an accident caused by the freakish Nature”. Of course, nature is the ultimate culprit, when you look at the fact that it had allowed the cancer, the homo sapiens,to grow.


“Indian Railways”, my friends said, “is a huge institution with the largest network in the world. Mistakes happen often. 99% of accidents are caused by the negligence of the staff. We got to live with it”. So do, those who lost their loved ones. So do, those whose dreams were snuffed out.


A whole country was mocked at. Lies, black lies, whitewashed truth. It continues. And we look up at them, those in power, in abject dejection and helplessness. We vote them into power – again and again. Democracy, my foot!


********* Balachandran V, , 10.10.2010
THIS POST IS ONE OF THE MOST OFTEN VISITED IN MY BLOG. READERS ARE REQUESTED TO READ THE COMMENTS ALSO, ESPECIALLY THE LAST ONE BY A JOURNALIST. THOSE WHO HAVE NOT FORGOTTEN, THOSE WHO WOULD DARE TO EXHUME TRUTH - I OFFER YOU THIS SPADE...


25-12-2011
Today I was travelling from Cochin to Trivandrum; I met this chap working in the Railways. During our conversation, I popped the question of Perumon; he said that it was entirely due to the carelessness of the driver/loco pilot. He said that when maintenance is being done on the railroad, the workers put up 'CAUTION' boards as well as signs on reduced speed. The signboards are displayed, he said, at distances sufficiently away from the work site so that the loco pilots have enough time to reduce speed. On the particular date signs were put up to reduce speed to 40kmph/60 kmph, but the driver ignored them and entered the bridge at 90 kmph. The driver, some D'Cruz or other was arrested and terminated from service, though the Railways hushed it up.
Posted by Balachandran V at Sunday, October 10, 2010