Kozhikode - the City of Small Goodnesses 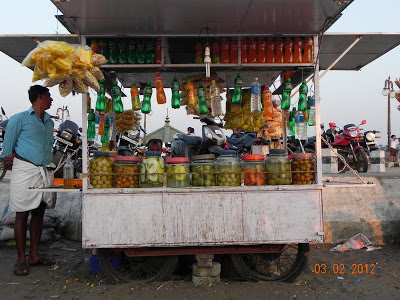 Having lived a lifetime in different parts of Kerala, I have like a true Malayalee come to love my native state, though I dislike most of my fellow people - for one reason. Their indifference and callousness to nature. The insensitivity of most, the lack of kindness in them.

It is well known among Malayalees ( it could be a myth too) that further the north of Kerala you go, more good the people are. For eg., the autorickshaw drivers of Kozhikode are famous for their politeness and the just fare they ask you. I have visited Kozhikode several times and every time I was impressed by their behaviour. They never charge you extra, they don't take you for a roundabout, they are polite to a point. But this quality extends to people of other walks too. Hoteliers, shopkeepers, passers-by. 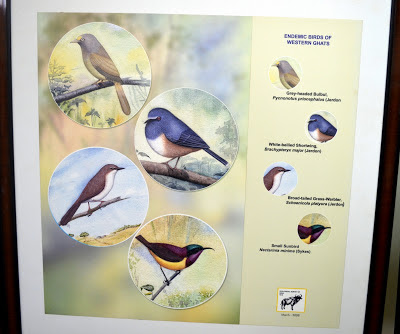 Last month I was in Kozhikode for two days. Since the person I was to meet could not keep the appointment, I had a whole day to myself. In the morning I took off from the Rly retiring rooms ( dormitory, very clean, only Rs.200/- per bed) to the Zoological Survey of India office where my old friend Jafar was working. He was away in the field so I sauntered through the exhibition hall all by myself. It has quite a good collection of exhibits and photographs displayed there. Having nothing else to do, I walk back to the private bus station and then catch a bus to the S K Pottekad Memorial ( S K Pottekkad was a Jnanapith award winner, a great storyteller and travel writer in Malayalam). On the way to the bus station, I happened to walk alongside a man to whom I asked directions. He not only gave it but offered to come with me part of the way. He was a shopkeeper on his way to open his shop. While walking, he proudly narrated the history of that part of Kozhikode, showing me the landmarks and how it were when he was young. It was a wonderful morning. As we parted our ways ten minutes later, I felt regret like leaving a friend.

Getting down from the bus I asked my way. The Museum is near the Kuthiravattom Mental Hospital. The shopkeeper to whom I asked for directions took so much pain in detailing the route. Not that he wasn't busy. But he could see that I needed help and took at least seven minutes off his time to ensure that I did not get lost. 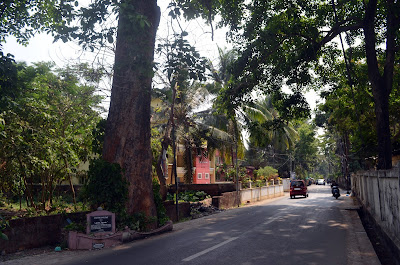 Near the hospital, I notice this old tree. A plaque was in front of it. An organisation has recognised its antiquity and put it up so that people would revere it. The plaque said - 'This is a holy tree. Along with contributing for environmental protection, this tree has given shade to countless passers-by and a resting place for the birds of air. We name it as the holy tree of 2010 and offer our respects.' A tree. Just a roadside tree.

It is noon. In the sweltering heat, I walk the streets around Mananchira Maidan, unwilling to go back to the Retiring Rooms. I wonder what I am doing there, having quit my job in the Bank and totally clueless about the foreboding future. Then, by the side of the road, beneath a shady tree, I notice this old Willy's in immaculate condition. I drool. I walk around the Willy's like a prospective buyer of a horse, taking in the winch and the ammo box and spade and metal can. It is so handsome that I have the itch to dive in and drive it away. A young man comes over, leans into the vehicle and takes out two packets in aluminum foil, one big and one small, and hand it over to some one. The recipient is obviously a labourer or a tramp. As I watch, an old lady walks up, gives a namaste to the young man; and again he dips into the Willy's, takes out another two packets and gives it to her. I notice a banner behind the Willy's. I read, 'Pothi-choru' ( Packed Lunch). The young man notices me and smiles. I ask him what is going on. He is one of a small group of friends who come here every noon with lunch packets - 30 or 40 - cooked at home. He says it is rice and fish curry. Did you have your lunch, Sir, he asks. I will give you one. I decline, suppressing a burp which carries the fragrance of Fish Biriyani from Saagara. 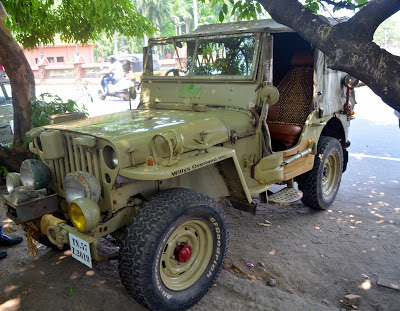 The youngster points at another two men chatting nearby. They come over and ask if I am from the media. We want no publicity, he says. We are professionals in various fields, but we take time off from our lunch break and distribute the lunch packs. Its free and first-come-first-served. My wife cooks it, he says. We are here every day at noon, it takes only about half-an-hour to give out the packs, yeah, mostly poor labourers or beggars, but sometimes others too partake. He gives the url of his website - www.avigna.org. I assure him I am not a journalist, but I might write about you in my blog. If you inspire somebody else to emulate your gesture, that will be good, wouldn't it ? 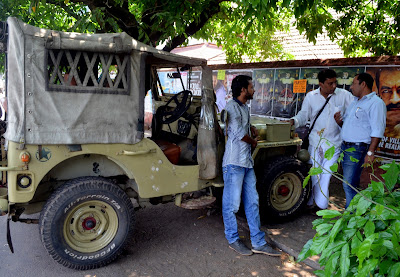 In the mid-day heat, I feel a cool breeze enwrapping me. Kozhikode is a city of good people.