A Monkey in the City 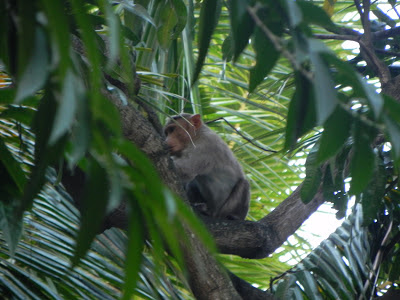 It was early; around 0630 hrs. I woke up to the yelps and howls of Sancho and Sally. This is the second time in the past one month that a monkey appeared here. The little patch of greenery that surrounds my house - the tamarind, the mango, the jack - trees offer shade and bring down the temperature a notch or two, is a resting place for the birds. Being right in the core of the city - my house is just 5 minutes walk from the Rly station/Bus terminal, guests who enter my house always marvel how cool and quiet the place is.

He is a Bonnet Macaque; he is a bit middle-aged. His right forearm is missing. The way it looks covered with fur would mean that he has survived with his handicap for some years. He is a long way from home. Crows have spotted him already and are cawing and flying around, pecking at him. The monkey jumps from the Tamarind to the coconut palm and then hops on to the 4th floor balcony of the hotel next door. I don't see him anymore. The fading away of the cawing indicates that the monkey has moved further away. 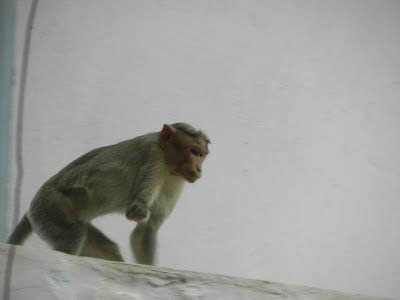 I wonder why the crows hate the monkey so much. Sancho and Sally - I am sure they would kill him if they could. I have seen them trapping and mauling a mongoose, how they revel in it! But they are not much different from human beings, are they? It is usually so pompously said that animals kill only for food. No, they also do it for the same reasons that Homo sapiens do - for fun, for domination. There are some documentaries that show the life of chimpanzees - cannibalizing and wantonly killing a rival group. Primates! 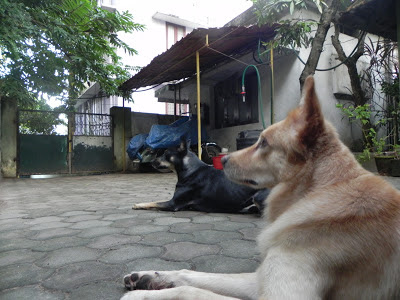 Sancho runs up to me and yowls. He is frustrated that the monkey is gone. I hug and hold him tight.