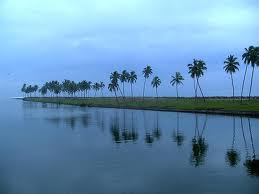 Courtesy: whotalking.com
While in a train from north to south,
Past the paddy, the groves, the lagoons,
Past where pearls glitter in sun,
Someone I love passed me by.

In a train from south to north,
Past the streams, the ponds, the lakes
On the tracks west to where I sat,
In that train fleeing past,
My son, my uttermost love, passed me by.

In that train that flew past me,
In the blur of faces that swept past me,
One was my son, my uttermost love.

K was home for two days; that was his surprise birthday present to P. I couldn’t be with him today, I had to be at work. Then, in the afternoon, I rode this train from Alleppey to Trivandrum; and K in a train from Trivandrum to Bangalore.  Somewhere near the bewitchingly beautiful lake at Paravoor, our trains crossed, going in opposite directions. I strained to look the fast moving train, hoping to catch a glimpse of K’s face. How silly! I know, but I was awed; I wanted to tell the guys who sat near me, ‘Look, look, my son is in that train!’  Then as we crossed the Paravoor Kayal, the water was silvery and pearly and the sun was so radiant and the breeze was so cool and my eyes were wet and I  got a glimpse of the vast sea beyond.