The Key Factors of Life 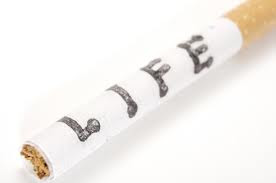 Life is a bitch; take it from me, I've had 55 years of it. Well, I'd agree, maybe in general. Or maybe not. But - sitting in a bus that took me oh-so-slowly from Kollam to Trivandrum, squeezed between two gentlemen of considerable girth ( that makes it three gentlemen), the sweat of one's armpit drawing bizarre patterns on my left shoulder and the right serving as a pillow for the other man who seems not to have slept for the last one week - it struck me - zen comes in the most unpredictable moments - that one's life has mainly two set of factors - those that can be controlled and those that cannot be. So? So, when you can't bloody well anything about the uncontrollable factors, what the f*** are we doing about those that can be controlled by ourselves?
Say, take my smoking. I can easily stop it anytime. Like Mark Twain said, ' Giving up smoking is the easiest thing in life; I know, because I have done it several times'. My smoking could be the cause of many of my discomforts; sore throat, cough, palpitation, giddiness - and whatever my ECG says I have. All I have to do is to chuck the horrible habit. Long ago, just after marriage, I quit smoking for two years! I kept on reminding myself that with every cigarette, I lost 5 minutes of my life. Life that could be spent with P and K and walking in the mountains.
Yeah, my Mr Hyde would then say, 'Listen pal, just think about the moments of great pleasure that Gold Flake King Size has given you. Just think of the poems you wrote, drifting in and out of the smoke. Think of the moment when you paused at the top of the hill and lit one'.
Or - shall we talk about the 32 goddamn years I've spent working in a bank? Oh, yeah, I had all sorts of weird dreams about doing this and doing that and - Ok, I've realized a few but many many are left unattended. Actually, I could do something about them - like going to Tierra del fuego or Scotland or wandering in the Himalayas - but that horrible interruption called 'priorities' intervene and my dreams are left in the lurch.
What are the things that really makes you feel that life is a bitch? Laziness. Procastination. Cowardice. Dullheadedness. Indifference. If one starts analyzing the whole rigmarole that makes up one's life, one can straightaway come to the conclusion that the Controllable factors are more than its opposite. Climate Change? Corruption? Accidents? Deaths? Pollution? Deforestation? Ageing?
The question that we should pose to ourselves is - What the F*** have you done about it?
Excuse me, folks, while I light a cigarette....
****** Balachandran V, Trivandrum, 23.08.2012
P S . Just wanted to share a poem I wrote long ago:
Gone up in Smoke
Crackling cellophane
As the packet opens-
Aroma of tobacco.
Fingers a- trembling, brain a- tickling.
The glowing butt, curling smoke
As the tip touches one’s lips-
Tingle! Deep intake of smoke
Seeps in settling, satiating one’s blood.
Rings dancing in the air
Wafting away into nothingness
Only a fragrance remains-
Then that too, like you, is gone forever.
************************ 31.08.2004