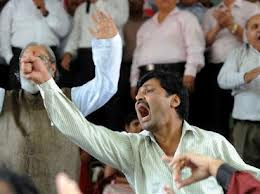 Two-day strike, but I reached home only in the evening of the first day. Wasn't sure if the Strike would be held, so has been the history of bankers in strike; left Alleppey in the morning, attended a marriage at Kollam at noon. Today, on the second day of the strike, I am short of cash and go to five ATMs, of different banks, including mine. They all say, 'REGRET'; probably cash in the ATMs must be fully exhausted. As I leave the fifth, a man standing outside asks me- ' Got money?' I shake my head and he clucks sympathetically and adds - "Those ---------ers! Striking for two days in this Onam season! ----ers should be thrown out!" I nod - whether it was in concurrence or not, I hope he could not recognize....!
******************** Balachandran V, Trivandrum, 23.08.2012
Posted by Balachandran V at Thursday, August 23, 2012