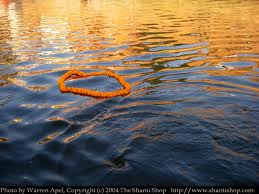 It is not about nationality or religion. There are certain icons   embedded  in one's subconscience; however one may try to raise oneself out of the confines of the country and belief system that one was born into, however universal one is, the spiritual umbilical cord with your nativity cannot be cut. Icons such as  Ganga, Himalayas, Kasi, Bharatapuzha, etc, are so ingrained in me; I find great solace in them. I consider myself an Indian just because I have been fortunate to be born in this land. If I consider myself a Hindu ( which I don't, in the religious sense) it is only because of the historical and spiritual baggage that I carry as  an Indian; anytime better than an American or British baggage!


Below is an unpublished poem I wrote long ago. I was in Varanasi, with my mother's ashes. I was not there due to religious reasons; I had never before visited this place and my mother's death was an excuse. During my 4 or 5 days stay in Varanasi, I wandered around the city, watched bodies being cremated, visited BHU and the Palace across the Ganges.


Despite its filth and crowds and ugliness, Benaras/Kasi/Varanasi left an indelible impression in my mind. I wouldn't mind visiting it again; I would love to sit on the banks of Ganges on a full moon night, alone.

To Kasi, With Thanks

Kasi/ Benaras/Varanasi. The ancient, holy city in India. Since ages, Kasi has been the final resting place en route heaven – or hell.

Amidst the filth, fury of the heat,
Amidst the chaos of men and machines
Amidst the riot of raggedly people
Amidst the stench of putrefying land.

What do I take from thee, Kasi?
For my wife, a couple of sarees
For my son, a couple of Kurtas
For my friend, an antique in bronze
For me? Just you in my heart.

Who are you, Kasi, are you the one
Languishing by the river? Or
Benaras, of the dilapidated palace?
Or Varanasi, the leprous one?

Kasi, why did you let it slide
Into this vortex of Hell?
You could’ve let it be
Your ancient soul and shadows.

For, if it were you, Kasi
I’d have strolled in your narrow galies,
Savouring the shade and smell of dung
Touching the cool stones with my heart.

If it were you, Kasi
I’d have swum in the Ganges
Touched the drop that long ago
I let flow at Vasudhara1 Falls.

If it were you, Kasi
I’d have met all those who left
Who walked away from my home afar
To you, to never return.