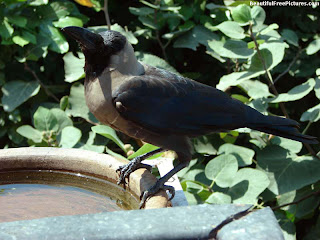 On the side of the porch of my house, a piece of discarded concrete pipe about 5 ft high is erected as a post on top of which we have kept a basin filled with water that I change every day. It is high summer. No sullen puddles lie in the street ditches; the drains that overflow in a matter of 10 minutes of shower are as ever filled with soil and filth caked to rock. On the roads you can see the street dogs lie panting in the shade – not of a tree because there aren’t many left, but beneath the parked motor vehicles. Crows – there aren’t many other species of birds in the city now – cock their heads in despair and thirst. Some in my locality know they can always get a cool sip at this old house in the heart of the city, where mango and jack and tamarind and rose apple and Asoka and coconut trees create an oasis in the middle of this concrete desert of a city called Trivandrum.

In the morning when I clean the basin and fill it up with water, the crows would hang around impatient and unafraid, rebuking me for being late. They would sit near the post, frowning at me, waiting for me to leave. As soon as I step away, they’d hop down to the rim of the basin, dip their beaks and lift their heads as if gargling. I wish they would go away and let a Kingfisher or Woodpecker or Sunbird or some colourful guys would come for a drink. I haven’t still lost hope.

During 1962-64, I lived in a place called Nemmara, in Palakkad district. Nemmara is famous for its Vela festival, which the aficionados say is greater than its glamorous cousin, the Trichur Pooram. Like in Trichur, the Nemmara Vela is a contest between the adjacent villages of Nemmara and Vallangi – they are actually part of the small Nemmara town, just a few sq kms in size, but come Vela, the villagers would turn into two clans and have a fierce but friendly of course, competition. As our house was in the Vallangi area, I proudly identified myself as a Vallangian; why, I studied at the Vallangi Upper Primary School – 2nd and 3rd standard! My best friend, Rajan, was a potter’s son; on the way home back from school, I would go to Rajan’s place which is a tiny hut with palm front thatched roof, in front of which Rajan’s father had a huge wheel that he rotated and magically brought out pots and water jugs(Matka). He even let me try to make one; I wasn’t very good at it. 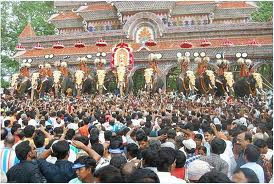 The Nemmara- Vallangi Vela take place in the month of April/May. Those of you who know Palakkad would also know its summer. It burns; just burns. Our house was quite near to the Nellikulangara Amma Devi Temple which was the focus of the festival. Even in those days, thousands used to come to watch the caparisoned elephants and the Panchavadyam orchestra and the grand finale of fireworks. On the day and the previous day of the festival, we kept large brass vessels (each with a volume of nearly 300 liters) in front of our house. One would be filled with Sambhaaram (buttermilk) and the other with Sharkkara Paanakam ( Jaggery drink). Father and mother would supervise the mixing of the drinks and our maids and gardener would pour out large glasses of buttermilk or Sharkara Paanakam – take your pick. I would be running around, looking important (my father was the BIGGEST government officer in Nemmara) and I would have a string of friends following me. Needless to say, my friends could have any number of glasses of their preference.

It is more than 45 years ago; yet I still remember the people pausing before our house, drinking the cool liquid to their fill and wiping their sweaty faces and – what I remember so clearly is the relief and happiness and gratitude in their faces. Some would offer coins – and I would stylishly say – no, no, no money, its free!

Even after we left for Palakkad in mid-1965, we used to come en famille for the next couple of years and stay at our friend’s and give this offering of sweet, sweet water, the cold sweetness of the well-water and the tangy buttermilk laced with salt, curry leaves, ginger and crushed shallots. The Panakam would have crushed dried ginger and powdered pepper.

At home, all alone, I sip Godrej’s Litchi juice that comes in a tetra pac. Its April once again. I miss that little village called Vallangi. I miss my friends of 2nd standard – Rajan, Prabhakaran, Muralidharan, Appu, Chenthamarakshan and Shobhana. When we passed into 3rd standard, we pooled our money and bought a big Matka ( in Malayalam we call it Kooja) from Rajan’s father for Sarojini teacher who lived near the school.

They were with me for a such a short period of time, yet I remember them with such a longing. An inexplicable sorrow wells up in my heart and despair that I may never see them, I may never know such happiness again. I despair for the passage of time that flows on and on like the waters to the great oceans. 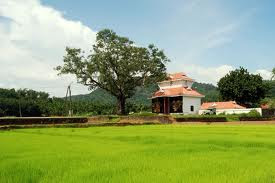