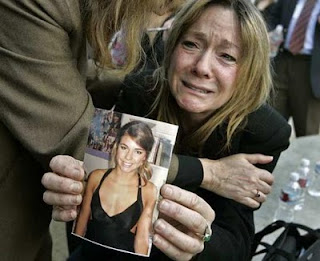 (Mother holding up photograph of her daughter, a victim of hit & run in Los Angeles)

It is 0935 hrs today; I am on my way to office on my Bullet motorcycle. On a narrow, dipping, curved stretch, a Honda bike comes straight at me, swerves to avoid a ditch and wham! , hits my right side. I am a fast rider, but very careful one. I am at around 40kmph when the bike hits me. Because my bike is heavy and at the last moment I had swerved to the left, I escape with a torn footwear and a sprained little finger. My toes are miraculously intact, except for a little pain. He had hit my brake and footrest with his bumper; both brake pedal and footrest got twisted and jammed. The fellow stops 10 mts away, glances back at me, and rush away.

I am 53; most of my peers do not ride a bike anymore; they drive cars. I am an expert biker, so I survive these lawless roads and drivers somehow. Suddenly, I am no longer the middle-aged man; I twist my bike around and give him chase. He dances through the oncoming traffic, takes unexpected turns and is a good 200 mts ahead. I blare my horn, my bike roars. 2 kms away, I catch up with him, overtakes, cuts across his path, gets down and as he removes his helmet, slams a right hook on to his jaw that sent him tumbling down from his bike. I pick him up by the shirt front, clinically assess the vulnerable points. He is taller, bigger, younger. I ask him, why the fuck did he run away. He said I am in a hurry. Exposed midriff. I punch him right on his belly and he doubles up like a folded paper. My right elbow hammers down on his back, and as he crumbles, I straighten him up and taking up a boxer’s stance, hit him with both my fists. The fellow bellows, don’t hit me, I am sorry.

Hit and run. You read it in the newspapers every day. You see it on the roads; Kerala has the highest number of road casualties.

A crowd gathers. People try to pull me apart as I take his keys away from his bike. People are shocked by the brutal attack. They threaten me. Some try to fling a punch at me, but I am too fast. I am surprised that the crowd lets the man go and turn their wrath upon me. I show them my bike, my torn chappals, my finger that had started to swell. You shouldn’t have hit him, there is Police to take care of such things. Accidents happen on the roads, they say, but you don’t hit people. Would you hit if it were your son? Don’t think we will care if you are an old bugger, we can beat you up worse.

In spite of the adrenalin rush, I am cool. I ask them – so you would rather side with someone who drives carelessly, hits me and tries to get away?

Moderates turn up and advise me to get lost fast. I move, though not so fast. Who the fuck are you to take law unto your hands, one man asks. I grin at him wryly; he is incensed. Look at the old fart laughing, he says and advances threateningly.

I am unable to go to office. I call them up, take my bike to a mechanic and the damage costs me Rs.1,100/- plus a new pair of footwear.

I am not gloating about the violent way I beat him up; it has been decades since I got involved in a scuffle. But everyday on the road, I see youngsters getting away with rash driving, leaving the victims without a glance of concern. Those hooks on his chin, those punches on his midriff, that elbow hammering on his back- that’s for every single one of them who have cared nought about others.

And as for the onlookers, I realize what angered them was to see a victim fighting back. It has been like that every instance. When a woman retaliates at an attempted molestation, the sympathy of the crowd goes to the molester. If she just sits down and sobs, the crowd will make appropriate noises of sympathy and covertly watch her exposed body. If an old man is pick-pocketed, they will shake their heads at the lawlessness and feel their own wallets. If a child is hit as it runs across the road, they will blame the child and not the speeding driver.

Here, I raise my middle finger in salute, onlookers!