My old friend who is in New York rang me up at my land phone a couple of days back. P took the call. Cheriyan told her that he could not get me on the mobile phone – ‘Switched Off’ – it had said; and there hasn’t been any recent posts in the blog for someone who churns out one almost every other day. P told him that Balan has escaped from Trivandrum – for a few days.

In Trivandrum, the mercury is shooting up. To boot, we have the ‘Festival of Women’, the largest gathering of women in a single city on a single day, the event that has gained entry in the Guinness Book of Records. The Attukal Pongala.

Women come from all over Kerala and Tamil Nadu. They spill out of cars, trucks, buses and trains. They throng the street sides, houses, railway station, bus station, vying for the better locations that offer shade and quickest way out. Glamorous actresses and foreigners add colour and spice. Sitting around makeshift hearths on the roadside, they cook rice and sweetmeats in the morning, sweating out in the sweltering heat to the background din from tons of massive loudspeakers and sound boxes spewing out cacophonic music. In the afternoon, at the signal of sprinkling holy water over the Payasams and Therali appams, the grand gala festival is over. Prosperity for the next year assured, the exodus begins. 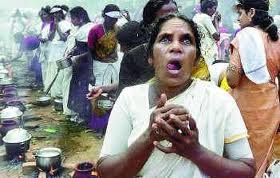 I am hardly doing justice to the event. You have to experience it to understand the magnitude of the crowds, of the ear-shattering noise, the suffocating smoke of thousands of fires, burning dried palm fronts and other such inflammable materials, the tons of waste of half-baked bricks used to keep the boiling pots over the fires, the frenzy of devotion.

For the last 5 years, I have been escaping the city during Pongala. Being in the heart of the city is no fun on the Pongala days. Since one cannot fight religion, the best option is to get away. I go to the hills where all that falls in my ears are the songs of the wind and the birds. All the chatter I hear is that of the leaves in the wind. In the morning, mist rises before my eyes.

I have nothing against these thousands of my female compatriots (including the mother of my son) who pray and offer Pongala to the Goddess Kali. I have nothing against the air pollution, noise pollution and the garbage they leave in my city. But this year, sitting in my thatched hut far away in the hills of Attappadi and gazing at the Malleesara peak and scattering rice to the Spotted Doves that crowd around me fearlessly, I thought of the 5 Kindergarten children and their Ayah who died drowning in the sewage of our City as their school van went off the road and fell into Parvathi Puthen Aar on the eve of the great day of Pongala and wondered if the tens of thousands of women who braved the sun and prayed for prosperity for their families and the Goddess Kali who benignly smiled upon her devotees – did they ever, for just a moment, think of the innocent children who lay in their little cheap coffins all dressed up in white and flowers around their heads and the heartbreaking wail of the mothers and fathers and the shocked and uncomprehending faces of the little children who stood around their dead friends… 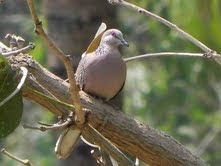 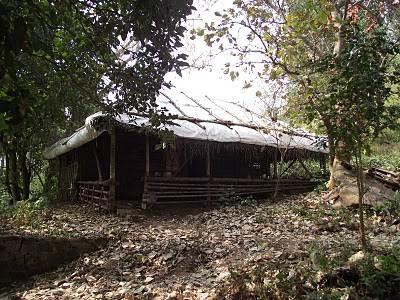 Sitting on the bank of the stream and watching a Grey Wagtail hop and skip over the rocks, I remember the faces I saw in the newspaper, the faces of innocence and beauty, which must be now slowly changing to unrecognizable putrefying flesh beneath the soil. I remember one particular face of a little girl and my heart constricts in pain as I watch the bird disappear into the darkening woods.