Who is your God? 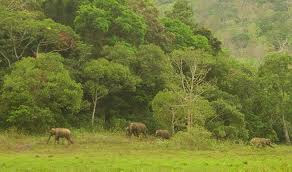 In the wake of my posts on the incident at Sabarimalai, two friends came to see me yesterday evening. They were concerned that I was contemplating on filing a petition to stop the lighting of Makara Vilakku by the Kerala government.

Pilgrims in hundreds of thousands visit Sabarimala every year during the 3 months season. The culmination of the pilgrimage is on the Makaravilakku day, January 14th , the day of winter solstice. On that day, to mark the occasion, kilograms of Camphor is lit at the hilltop called Ponnambala Medu, which is visible from the temple of Sabarimalai and other vantage points.

The Makara vilakku was always lit by humans; it was never a divine, miraculous glow from the skies above. In its vague history, the local tribals used to light it; then the Pandalam royal family used to organize it. After annexation of the temple by the Dewasom, till early ‘80s, it was an ordinary event witnessed by hundreds of devotees. As the Ponnambala Medu was situated near the sensitive hydroelectric projects of the area, the lighting and other arrangements were made by the Electricity Board with the assistance of the departments of Forests, Police and Devaswom (Temple affairs) of the government.

In 1982 or thereabouts, the Rationalists’ Movement in Kerala objected to the lighting of Makaravilakku on the grounds that it promoted superstition and that the devotees, especially from the neighbouring states were duped into believing that this is a divine light. The Rationalists managed to get up the hill and as a mockery, lit several piles of camphor and let off crackers. They were arrested, beaten up and then let off. But since then the entire affair has been conducted in strict security and secrecy.

Into the eighties, the pilgrim flow to Sabarimala grew into huge proportions; so did the flow of money. Billions of rupees – where has it gone is anybody’s guess. The government, the Devaswom, the contractors, the business interests – it is imperative that more pilgrims come. Commerce rules Sabarimala, as it does other centres of worship, be it of the Hindus, Christians, Muslims or of any other religion. 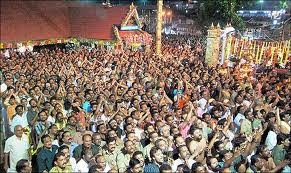 In 1999, 52 pilgrims died in a stampede as they were returning from witnessing the Makaravilakku. As usual, there was a lot of hue and cry, enquiry commissions etc, all of which finally ended in the decision that MORE facilities should be provided for the pilgrims to watch the Vilakku. After the recent accident, the government has immediately sanctioned Rs.120 crores. More facilities meant more buildings, more roads, more permanent structures – in fact, more money for all those concerned. Fine. Nobody can say no to that. As the supreme beings who lord over the world, we should do what is best for us. Except for one thing.

That the Sabarimala shrine is situated in the Periyar Tiger Reserve, one of the most sensitive habitats of the exceedingly threatened species. Not only that, the area is the source and catchment area of one of the major rivers of Kerala, the Periyar. It is the most important water source not only for Kerala but Tamil Nadu also. Just check it out in the internet.

The question before me is clear. As a human being, what should be my priority? To protect and speak for nature as represented here by the Periyar Tiger Reserve – nature which gave me life, gives me air, water and all the elements on which I and all life on earth sustain – or to appease the silent, invisible entities whose cause is upheld by money, political power, ignorance and avarice which has hurled and continue to hurl millions of fellow humans into darkness? To protect life or to destroy it? Who should be my God, Nature or Mammon? You may scour your religious texts, my reader, and tell me if you find anywhere in them the answer to my question. 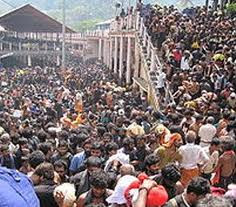 The friends began. ‘Nowhere is it said that the Makaravilakku is divine. What can be done if some ignorant people believe it is?’ He could be right. ‘I asked my wife, my mother and the neighbourhood boy – they all said they know it is lit by people. So, whom are you questioning? Whom are you complaining against?’ I replied that maybe most Malayalees knew it was a fraud, but it is money from other states, those poor souls, those teeming millions of Tamilians and Telugus. Suddenly one of the friends broke out. ‘Why are you always talking about US? There are equal numbers of such frauds in other religions, what about the ‘Charismatic’ group, the divine life crusades where the ‘wheel-chair ridden woman’ would jump up and walk with a Hallelujah? Balan, you find fault with ‘us’ only.’

I blink. I understand. Us. And them. Us – who are this ‘us’? Hindu? Here, I declare to the world, I AM NOT A HINDU – NOR AM I A CHRISTIAN OR MUSLIM OR ANY OTHER RELIGION! I AM A HUMAN BEING AND I AM PART OF ALL LIFE, ALL THINGS IN THIS EARTH, ANIMATE AND INANIMATE.

I realize that there is no point in talking to him. He says – the best solution to ensure that such tragedies do not occur is to leave the temple open 365 days, so that rush will be less.

If so, why there are fewer crowds on the first week of every month when they keep the temple open? If so why the unimaginably huge crowd, compared to other days of the season, on Makara vilakku alone? Why do they gather there 1 week earlier, just to gaze at a light that some Mallu buggers light? The event is special for them, because these poor devotees believe it to be ultimate moksha to witness the miracle of Makara Jyoti. I tell my friend – ‘Keeping the temple open for 365 days would mean the death knell for the forests. Permanent constructions, resorts and other paraphernalia would come up everywhere. The whole Reserve would be surrendered to commerce. Already the Pamba River is heavily polluted, so is the soil, the disturbance. By restricting the pilgrims to a season, one can at least hope for a continuity, give a chance for recouping for the forests and wildlife.’ ‘I do not care about the forests’, he tartly replies.

I decide not to argue with him. In spite of his qualifications, his position in the society, his good manners, looks and culture, my friend is a sneaky, rabid, religious fanatic at heart. I am not disappointed or sad; I am past such feelings about most fellow humans. I just prefer to observe them and gaze at the dark emptiness of their souls.