The Secret Life of Balan Mitty “That’s it! We are done for!” Dhoni’s voice broke. “7 wickets down, 30 runs to win in five balls! Good bye, World Cup!” It was the finals of the One - day World Cup - between and . All the big-hitting batsmen were gone. “Well, don’t lose hope, we still have Balan”, said Tendulkar who had been out for a duck. Dhoni caught the note of sarcasm in Tendulkar’s voice but didn’t reply.

There had been a lot of controversies for bringing Balan into the team at Dhoni’s insistence. “What do you mean, Captain, that old boozing has-been?” the chief selector had asked incredulously. But Dhoni was quietly insistent. “It’s a gut feeling. Balan saab has been always underrated by you people. He has never been given the opportunities he deserved, you know that well.”

ndian Cricket was rampant with parochialism. The southies, especially the Mallus, were always at the receiving end. But Balan, the veteran all-rounder, they could never ignore. They always looked out for the smallest reason to throw him out of the team. But, now into his mid-forties, Balan still astounded the Cricket world by his consistently brilliant performances – that is, until last year, when shattered by the loss of his wife, Balan took to drinking heavily. The cricket loving world mourned the loss of their greatest player; his rivals celebrated Balan’s downfall.

As final selection for the team for World Cup came to a close, Dhoni, who had learned the finer points of Cricket from Balan, fought for his inclusion – and won. But Dhoni regretted it now. Balan’s game in the matches that led to the final was lacklustre and far from inspiring. Dhoni knew well that he will have to answer many questions once the tournament was over.

“Wish me luck, Cap!” Dhoni looked up at the voice. Balan was tightening up the pad straps. ‘Do your best. Blast the Pakis,” said Dhoni.

Balan, walking up to the pitch, wryly smiled to himself, looking at the packed crowd that had gone silent. People were already getting up and leaving the stadium. ‘My countrymen never could take a defeat gracefully’, he thought. ‘This could be as well your last game, buddy’, he told himself. ‘You are a write-off. Well, let’s give the buggers something to remember, uh? Get ready for the swan song, old man.’

At the non-striker end stood the Sardar, frowning and shoulders slopping. The body language was sending out loud and clear messages. “Well, well, look at the old duckie wading in”, smirked Aamir, the captain. Balan paused and looked at Aamir – and smiled. This boy! Balan remembered how once Aamir ran out of the crease, frightened out of his wits at the bouncer he had thrown.

As the Pakistani supporters roared and Mexican wave-d, the TV cameras zoomed in on the gloomy countenances of the Indians. Wasim Akram spun the ball, waiting calmly for the umpire’s signal – the signal for the kill. And then – Akram began the run-up.

As the crowd watched with bated breath, Balan stepped forward calmly. He stood there, like a colossus about to fall. As the ball reached him at 150 kmph, he swung the bat - as the stadium watched, the ball soared and soared, arching, as if resisting gravity and then fell deep outside the boundary. 6 runs; 24 to go.

And then new history was written in the annals of Cricket. Hitting, hooking, driving, slashing – breaking every convention in batting, Balan made mincemeat of –

“Didn’t that doctor tell you that you shouldn’t eat meat? You are eating too much beef these days, B! You should check your cholestrol. And when was the last time you went for a walk?” Before she could remove the plate, I grabbed the remaining pieces of the fried beef , rolled them into the last Paratha and bit into it.

Far away, I could hear the fading cheer of the Indian fans, as I walked slowly back to the pavilion, bat and a stump in hand, taking in the delirious joy of my countrymen… Balan, the living legend of Cricket, the greatest ever all-rounder of India... 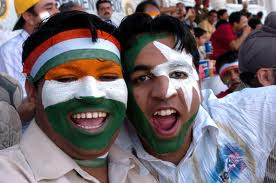