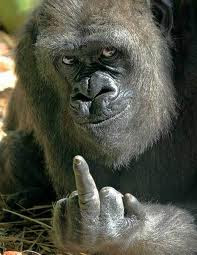 The screen suddenly went black. Power failure. My friend Rahul and I were sitting in the ‘Reserved’ class of the movie theatre. Reserved class is at the farthest end of the auditorium; behind us, the door opens to the hall outside. This was way back in 1977; Sreekumar Theatre was yet to have a standby generator, probably because power failure was not very common those days. It was an afternoon matinee show; the door behind us was flung open and people casually got up to stretch their legs, till the show started again. Sitting near the aisle, we could see our silhouettes on the screen. I raised my hand; in the white screen, my shadow too raised its.

We were in our early twenties; still in the shadow of our adolescence. Rahul said – “Dey, lets give a middle finger jerk! The arseholes don’t even have a generator. The entire audience will notice it; but wouldn’t know who did it”. I said – “No, that’d be crude; it’s indecent.” Rahul turned to me. ‘Don’t be such a prude! Indecent, indeed! You’re just scared someone would bash you. You and your f- ing principles!”. I retorted that it is not because I am scared, but I feel it to be wrong. It is lack of culture, like some bums, to show a middle finger jerk in public. Rahul started mocking me- “ You are scared, but instead of admitting that, you are bullshitting with your principles. You have been taught that you shouldn’t and you are just afraid to break the rules”. I said you are wrong; if that is our society’s values, I have imbibed it, because I too feel that it is wrong to show obscene gestures in public. Even if I am bold to do that, I wouldn’t, because such values are mine now. Thus ensued, one of our usual hot arguments over silly things.

Which came first, the fear of breaking society’s rules or making your own rules, whether they agreed with that of the society or not? What is decency and indecency? What is obscenity to you? Is it what you would not do in public only? Is it based on ‘Do not do in private what you would not do in public?’ Are we all, basically crude, gross human beings who are just kept in reins by the values and norms of the society? Or aren’t we intelligent enough to distinguish the dos and don’ts, aware of the limits of individual freedom and the requirements needed to be a member of a society? Where do we draw the line in morality? Does conformity to one thing indicate conformity to everything else too? Can’t we have our own set of rights and wrongs, what if some agrees with that of the larger world? Rebelling without a cause, what is it’s point?

Insignia commented : Profanity? Uttering it without having any intent is much better than not uttering but having the intention. I disagree. Restrain over one’s words is a quality of self-discipline; we owe that much to society. We mock at discipline, thinking that lack of discipline is freedom. Only a right blend, a balance of individual rights and individual responsibilities would make a good society; history has shown and continues to show how human society has fallen into decadance, not only moral, but environmental, cultural and political, whenever they have leaned too much, either way. The question as Dr Antony raised is not whether you should call your teacher by the person's name or address him/her as Sir/Ma'am. The question is how much respect you have for the other. It is an