A Tribute to Carson 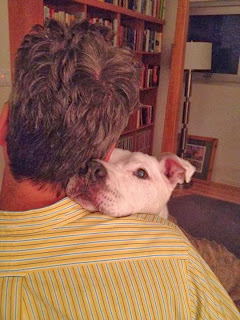 I reproduce below what Tom Junod, a FB friend of mine has written on his Facebook page. Nothing more can be said about the relationship between a man and his dog. I am reminded of the several posts I have written on dogs; and also the poem, by Pablo Neruda on the death of his dog. The poem can be found somewhere in my blog.

Give your dog a hug, and thank him/her for all the love he/she has given you; and for giving you the ability to love back.


"We did not give our dog Carson his name. He was two and a half years old when we got him, and he'd already left behind life as a "bait dog" in a fighting ring south of Atlanta and a subsequent year and a half of rehab and rescue. We got him with broken teeth, small scars on his face and big scars on his neck, and a ten-inch burn down his back. To the end of his days a few people crossed the street to avoid him, but anyone with half a heart and eyes to see knew that he was the gentlest of souls. We had him for 11 years, and in that time he hurt nobody, and gave us nothing but happiness. He died 630 this morning, from the complications of a tumor in his belly we knew nothing about, and to his last breath I was -- and will remain -- astonished by his simple goodness. I hope that we healed some of his scars. I know he healed some of mine."