In the wee hours of the day that I roam the town on my bicycle, the only establishments open are the small tea shops and  the temples. Improperly attired for an entry into the sanctum ( sweat soaked Tee Shirt, track suit with a week's dirt on it and floaters) and inadequately attuned for a 'darshan', I keep a low profile as I walk around the holy shrines.

The typical Kerala temples are enchanting in their seemingly simple architecture. They are not built to dominate the surroundings like the Christian churches or the Tamil temples; instead they blend with it. Most of them have a open grounds with old Ficus trees. The extent of the ground vary. I will not go into the details of Kerala temples here, but would suggest a book to those who would like to know more about Kerala temple architecture written by Ramu Katakam.

This is the Mullackal Rajarajeswari temple, almost directly opposite to my workplace. Quite popular, it is here that the famous 'Chirappu' festival during mid - Dec is held. 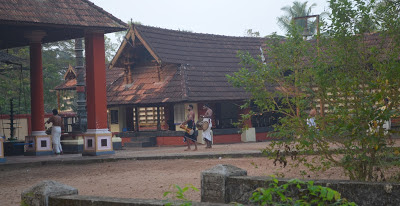 Kalarkode Mahadevar temple. Most temples in Kerala has large tanks. Many of them have fallen into disuse or filled out. 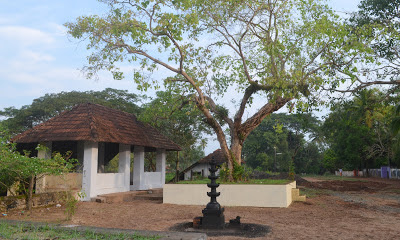 The Kalarkode Mahadevar has a substantially large tank. Serene surroundings. 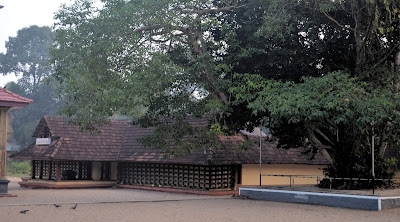 Kottankulangara Devi temple. Actually the one shown here is the Krishna temple adjoining the main Devi temple. The huge facade in front of the Devi shrine is rather jarring. I didn't like to take a picture.

One has to really experience the atmosphere of these places. Unlike the commercially successful temples like Guruvayoor, or Padmanabha swami or Sabarimala, the large majority of Kerala temples have an air of meditation, of an inviting spiritual sanctity about them. Priests don't pester you here; nor do garishly painted and crudely crafted statuettes shock your senses. But the temples have a air of aloofness too. They tell you - ' Come till here. Don't go further.' There is a distance that is to be kept,  that is silently demanded and maintained.

Everyday that pass remind me of the approach of the day I will bid goodbye to Alleppey. The town and I - we talk to each other silently, one offering and the other accepting, both respecting and giving space to each other.

The other day, a close friend of mine casually announced that his daughter is having her engagement a couple of days later. I was totally surprised when he answered to my questions that the proposal had come two or three months earlier, that he and his wife had gone to visit the boy's place, that the boy's people had come here - our friendship goes back to more than 25 years, before his daughter was born. I was hurt that he hadn't told me about it earlier. Considering how fastidiously we had nurtured our relationship all through these years, considering the fact that how I used to run to him with every problem or every mite of joy or sorrow, I couldn't help this dull pain inside me that he pointedly ignored to invite me for the function or tell me about the wedding plans. Of course, I did not show my hurt, I congratulated both the father and daughter. Later, I reflected on the incident and realized that I shouldn't be feeling bad about it. If my friend didn't want to tell me, if he didn't want me at the engagement, he must have a reason, I thought. P sensed my mood and comforted me by saying that my friend probably didn't want to tell me about the proposal until it was confirmed. Later, the day of the engagement passed; in the evening my friend telephoned me. He was rather apologetic when he said that those present at the function were only the close relatives, which I really appreciated. Why have a sprawling, larger than wedding function for a engagement? I am at rest, but have to admit that slight pain still lingers somewhere. What is meaning of a long friendship if you are not trusted? I don't know. Maybe it is not a matter of trust, it is a matter of keeping the right distance.