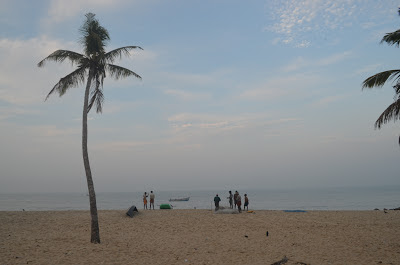 In the little notepad that I carry around with me I have scribbled such at random:

5. Boat ride from Alleppey to Kottayam

8. The clean and well-lighted places

A mind swirling with thoughts at times; at times a vacuum, at times at peace, at times in a turmoil, joy, sorrow, indifference, hurt, happy... It has been exactly a month since I blogged. As can be seen from above, it is not the lack of subjects but the unwillingness to put them across to you that has kept me from elaborating on them. Every time I open the netbook and look at the blank page, I would wonder - why? What I am trying to tell people? Why do I want to? What difference would it make to the few readers that I have? I was reminded of the late blogger, Ms Kochuthresiamma. She passed away nearly a year ago. Quietly. I sometimes visit her page, almost hoping to find a new post from her.

Looking back at the more than 4 years of blogging, I realize that it has been a journey of self-discovery. Except a few, most of my posts have been about myself; how I react to my surroundings. Couple of years ago, an American commented that he is unable to take anything from my writings because it was all about sorrow and disappointments and such negative thoughts. He suggested that I should think positively. Though I felt snubbed at first, it dawned upon me that what he said is true.  Mark, I think his name was. Now I feel so grateful to Mark.  By thinking, by scraping out bits and pieces of goodness in me, I have been able to change my attitude to life. From the responses of my readers, I could sense that some of the joy of life could be shared with them.

The countdown has started. If nothing untoward happens, I should be out of the bank by the end of March 2013; I have given the mandatory 3-month notice to the Bank. Already the news has spread through the grapevines and the first question they all ask me - 'So what are you going to do afterwards?'  Explaining is pointless and tiring. So I limit to one word - 'Nothing'. Those who know me would say, 'oh, going to Himalayas, taking up photography, writing etc, uh?' 'Maybe', I say.

One man said - 'Balan Sir, what you are doing is a great mistake, a great mistake'. In some, I recognize envy. In some, I can clearly hear the gurgle  and the thought - ' I hope he is going to regret it, oh how lovely that would be."  Very few share the hopes of freedom. Very few say, 'Good for you, Balan. All the best for the great adventure'.

The way the world is, if I fail or misery befalls me, they would all say, ' I knew it, I knew it, I told you so.'  Only the few who wished me well would continue to support me.

I wait impatiently for the three months to be over.  Honest, I have no plans for the immediate future, except a few visits - Bombay, Calicut, Mussorie and some more. I would  start with tidying up the house, playing with Sancho and Sally ( my dogs) to my fill, pounce upon my old libraries at Trivandrum with gusto, go for  long bike rides with K during the summer holidays, start working on a website on western ghats , work at our organic farm in Attappadi - well, it seems I do have a lot of plans!!

During the last month, I did have a few setbacks, disappointments and instances of sorrow. But I have been able to override all that. I am surprised at the unknown reserves of inner strength in me.

Life beside the backwaters, Alleppey