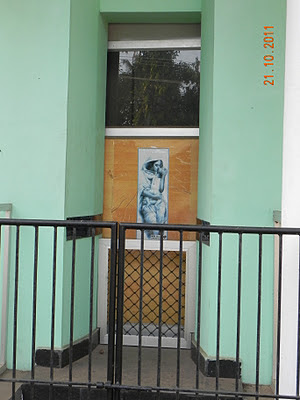 I do not know whether they have something like this in other parts of the country, but the one in Trivandrum is near my home and now I saw this in Alleppey. Probably the Child Welfare Council has one in every district.
Once again, the highest evolved species of homo sapiens prove how unique and advanced it is in comparison to the rest of the species. I do not think even the most detestable rodents would do this - leave one's own flesh and blood to the streets... 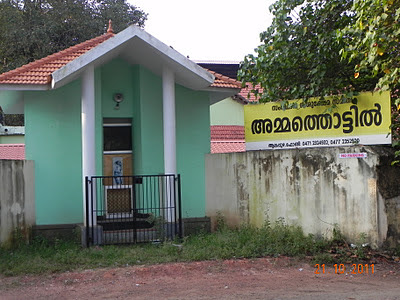 To those who might not have reallised what it is - it is called 'Amma- Thottil' - Mother-cradle, where women may leave their unwanted babies, incognito. There is an opening beneath the picture, like the cat's passage or little door you see in western countries, inside which there is a cradle... In the evenings, thoroughout the night, a little lamp burns and whenever a baby is deposited, an alarm sounds, to alert the officials.
I try to imagine how it would be like to grow up without ever knowing who your biological parents were. It feels like an aching emptiness... like a rootless, drifting plant...
Is it a matter of irony or an instance of great insight into human nature that India's most revered epic, the Mahabharata has the incident of Kunti casting away her firstborn, Karna? Perhaps the very seed of the Mahabharatha War was sown by that!
**************
Balachandran V, Trivandrum 13.11.2011
Posted by Balachandran V at Sunday, November 13, 2011