There are certain moments in life that causes a kind of distress, an indefinable grief. I am just talking movies here, don’t worry.
The other day evening after the PC session, I switched on the TV. Movie channels are my favourites, especially Lumiere and UTV. Sony too shows good movies at times. I caught Paris, Je Taime’ ( Paris, I love you) somewhere in its middle. It is a collection of 18 short films, each of 5-10 minutes or so. The one I want to talk to you about is about the black man. The movie's name is Place des fêtes.
The film opens with a close-up of a black man’s face in his late twenties or early thirties. He is so handsome, so masculine. There is a gentleness in his face that you cannot really confine to an adjective, a gentleness that comes from much suffering. You can see that he is sitting down leaning back to a wall. He groans as if in pain. As the camera moves slightly backwards, you see the back of the head of a woman, with braided hair. She is squatting, head bent towards the man’s midriff. She is doing something. The man groans. He opens his eyes and looks at her. ‘You came, finally’. The girl glances at him and says nothing. Now you see her face; a beauty that escapes description. In her eyes you see concern. The black man looks at her. ‘What’s your name’, he asks. ‘Sophie’. He smiles. ‘Will you have a cup of coffee with me? She looks at him and then turns and asks somebody nearby to bring two cups of coffee. ‘Do you think coffee is good at this time?’ asks the unseen person.
The black man sings an African song, softly. He says, - ‘It was different in Nigeria’. ‘Where are you from?’ She gives the name of another African country.
He asks – ‘ Would you like me to massage your feet?’ The girl smiles slightly. ‘Why should I let you massage my feet?’ ‘Because’, the man says, ‘ you were running in my dreams’.
The scene cuts to an underground car parking area somewhere in Paris. The man is a cleaner, sweeping up the place. In the semi-darkness, a car comes in fast, and takes a wrong turn. The man shouts at the driver- ‘ You are going the wrong way!’. The driver turns the car around, parks and runs up to the elevator. We see that the driver is the same girl. She throws a smile at him as she passes. After some time she returns, running towards her car. She starts and drives off. The man runs after the car, shouting, Mademoiselle!, but she cannot hear him. The supervisor is angry with the man for leaving his station and threatens to chuck him out.
The scene shifts to the man sitting by a pavement side, playing a guitar. He plays beautifully. Passersby drop a coin or two or a currency note. He is uncaring, immersed in his song. Walking away later, the man suddenly notices a group of young persons standing; the girl with her back to him seems like the girl in the car park. He goes over and touches her shoulder. He is dismayed and apologizes for the mistaken identity. As he leaves, a gang of rowdies approach him, forcefully take his guitar and runs away. As the man begin to pursue them, he is knifed by a rowdy.
We are back at the first scene. Now we see that he is not far from where he had fallen stabbed. As the camera moves backward we see the full scene. The girl is a paramedic. She is trying to stop the bleeding and readying the man for the ambulance. The man is now silent and sits with eyes closed. We then hear the voice of another paramedic who has brought the two cups of coffee. Camera is close on the left profile of the girl’s face. She looks at the man. His face is slightly out of focus. The girl holds a cup of coffee; as she looks at him her eyes well up with tears. It flows down her cheeks and drips into the cup of coffee. ‘First time in the streets, uh?’ asks her colleague sardonically.
*********** Balachandran V, Trivandrum, 21-01-2011 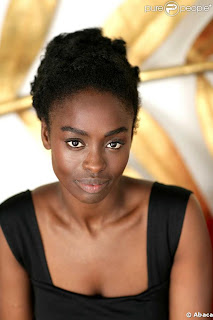