A Graveyard of Books 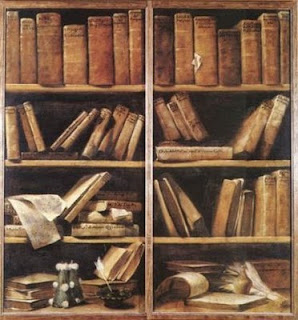 The moment you enter the dingy hall, it is as if you have ridden a time machine to the mid-20th century. The solemn-looking heavy wooden, glass-fronted almirahs stand in the darkened shadows like mummies in a catacomb. Most of the lights do not function; there are ceiling fans, lifeless, from a period movie. The forlorn tables and chairs are thickly dust-coated; so are the piles of old, musty books heaped on the tables and strewn around. The librarian who leads you is as ancient as the library; bent as if the heavy key bunch is wearing him down. I mumble- ‘Travel section, please’. The prematurely aged man fumbles among the dozens of keys in his hand and selects one. Moving to one almirah he opens it; as unwillingly as its doors creaking open, displaying the books stuffed inside. Old, reverentially ancient. I look at them, unwillingly to disturb them from their torpor.

This is a library in the city, nearly a hundred years old. It has a collection of hundreds of books and journals since its inception. Donations make up the majority of the books. There is NO catalogue; subject-wise division is vague. You will be dismayed to find accountancy books among religion; fiction among science.

I do not have dust allergy, touch wood. I am quite comfortable among the fungus-ridden printed volumes, which remind you strongly of a forgotten graveyard. I squat, pull out a handful of books and take them to a corner where a shaft of sunlight falls into the room.

I am among the dead. They dreamt, lived and died more or less like us. In archaic, stiffly polite language, these travelers of yore tell you of their great adventures out of their world, which was much smaller than ours. They ventured out to , , Benaras, , , , Arabia and then of course, ! In the dim photographs I see them in their Chaplin-esque attire. Silk sarees are draped in a totally different way. The women are dark-skinned but elegant and remote. The ‘England-returned’ men look suave in their suits and spats and flowers pinned on the coat lapel. Natives look prehistorically primitive.

I scour each book. I am searching for old travelogues on Himalayan travels. Then, I open an unassuming book, very prosaically titled, ‘Oru Himalayan Yatra’ - A Himalayan Journey. My senses quiver. I have a feeling this is not a run-o’the-mill travelogue. It isn’t. As I rapidly read the preface, the first few pages, I realize with great excitement that this book is the first Himalayan travelogue written by a Malayalee. The year, 1924. Later, many months later, I learn that this is the only copy left in the world.

But that is something for another rainy day’s blogging.