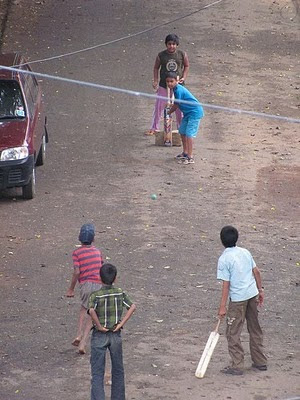 I look down at the street from K’s balcony. It is 0730hrs on a Sunday. It had been drizzling in the night. A damp morning and the sun seem to be reluctant to wake up like K and his friends. On either sides of the street, the parked cars look like street dogs curled up and dozing. Four children are playing Cricket on the street. Wickets are drawn on the tarmac with brick dust. The bowler in his early teens spins the ball in his hand like a veteran spinner. He scrubs it against his shorts front and makes a couple of warm-up swings. Running up a few steps, he delivers a short-pitched ball. The batsman, a rotund boy of same age, takes up a stance. I can see a little boy, maybe 5 or 6 years old and a self-appointed wicket keeper standing close behind the batsman. The batsman swings his bat backward. In the split second before he hits the ball, the bat swinging backward in an arc hits the kid full on his face; in the next one-tenth of the second, the batsman strikes a hook shot. Just as the bat hits the ball, the little kid falls on his behind. As the ball shoots off in a tangent, like a vocal representation of its ascend, a wail shatters the peace of the morning. Hell breaks loose; so does the players from their positions. The fat batsman, full of remorse, kneels beside the hurt party and vigorously rubs his face and ears. The wail rises to a shriek. The other two boys smack the fat batsman sharply on the back of his head. The batsman drops the injured wicket-keeper and all of them jostle for sometime as the wicket-keeper’s wail descends to jerking moans and he too seems to forget his pain for the interest in the ensuing fight. The boys then seem to remember the hurt party. The little kid, his cries again rising to a crescendo, is picked up and carried stretcher-like inside a house.

A cat watches the entire incident from the top of wall at a safe distance. I am not sure, but I thought I could see the cat snickering.