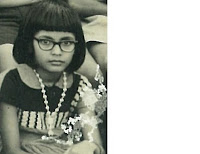 The boy had finished writing his answer paper. He pondered for a while on what should be done next. Shyly, he asked the girl sitting next to him – he hadn’t noticed her before – all he could see was a bobbed head bent on to the desk, writing furiously – ‘What do I do now?” The girl raised her head and looked at him, the boy who had joined the school recently, and answered- “you fold it lengthwise like this and on the back of the right fold, write your name and class”. Then she went back to her writing. The boy saw that she wore glasses and was fair and beautiful. I don’t know what went through the boy’s head, but he did as was told and left the class room.

This happened sometime in 1965. The children were studying in 4th standard. The year after next, the boy left the place to far off and all he had was a group photo which said : “Standard IV , Olavakkode, Palghat 1965-66. That boy was me and the girl, R.

I have never met her again, but I did not forget R. The only time I talked to her was at the above exam. I do not remember whether I thought of her then or tried to talk to her; unlikely because she was in another division. But when years later, in 1974, I met my old friend from Palakkad, one of the first things I asked was about R. And he even now teases me about it. Last year we had a reunion – classmates from 4th std – and we recollected our old days and laughed (See my post, ‘The Reunion- October 2009). Unfortunately none of the girls came for the two-day gathering. Guys ribbed me about R and said, “Eda, R is a grandma now”!

I look at the old group photo and think of R and my old classmates fondly. Some of them are no more. Most of them are alive and lead a reasonable life.

I do not know why I should still remember R with such affection. Was she my first love? At 7 or 8 years of age? I do not know. All I know is that even now when I look at her picture, it all comes back in a rush and I feel happy with my memories. They are mine, you see. They shall remain with me as long as I am alive. Then, along with me, they will be erased, forever.