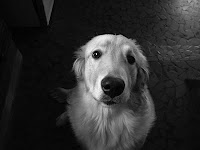 It had started raining early in the evening; there was no sign of a lull even later in the night. So, like always I do, I let the dogs inside the house. Tommy, the father, curls up on floor mat; Sancho, the son and my pet, nonchalantly lies down on his back beneath my cot, exposing his deep chest and genitals for the cool air of the ceiling fan. Next morning, I spot a puddle of urine on the corner of the verandah. I look daggers at Tommy and shout at him, drag him by the collar and show it to him. ‘Look what you have done, you stupid old dog, peeing inside the house!’ Tommy’s face is full of remorse and shame and he kind of prostrates before me, begging forgiveness.

Shame. Sometime ago, my son and I had a quarrel. K shouted at me, ‘I am ashamed of you!’ Parvati, Head of the Department of Botany in her college, once said, - ‘I am ashamed, begging for a lift in the cars of my colleagues. I am the only teacher in the college who doesn't have a car.’ Her college is on top of a hill and to reach the road and catch an autorickshaw or a bus she has to walk down a kilometer. We had never got around to buying a car for our own several reasons.

Reflecting on my past, I realize I distinctly remember each of the innumerable instances of shame, of self-contempt, of self-pity. Instances in which I have lost out, due to my handicaps, my ignorance. I shudder and grimace at the very thought of such times; I wish I were dead.

Glancing at the obituary columns, reading about people who commit suicide, singly or en family due to financial problems or some public ridicule; youngsters, for failing in examinations or in love affairs – I have always empathized with such people. I try to imagine their moments leading up to the final act, like killing their own children, killing themselves. They were amongst us, you see, perhaps you would have seen them waiting at the bus stop or queuing up at the cinema or relaxing at the beach. I think of them and ask them silently, why why, you could have waited a little more, problems would have been solved, you could have come to me-

Couple of days back, there was a terrible crisis. When I gave the title deeds of my property to the bank for a loan, they said it was not the original, that I have been living in this house without any rightful ownership. I will not go into the technicality of the issue, but when I heard this over phone, I sensed a kind of clamming up in my heart. My face went pale and my sight went vague. My colleague was asking me something; I said please, I am not in the right frame of mind now. There was a kind of stillness in all the movement around me. I was like the one in the TV ad where the man stood watching, frozen, as the rest of the world moved on, in slow motion. For sometime, there was this eerie silence. I bowed my head, in shame. I thought I had failed in my responsibilities, that I have brought only ruins of sorrow for my family. When in shame, we bow our heads, unable to look up, unable to look at others, unable to look at ourselves, unable to see anything other than our miserable selves.