Sights and Smells of a Morning Walk 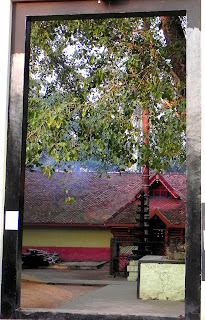 Recently, I went for a different kind of  walk. I might call it Meditation Walk; don't think there is nothing new in it. This particular walk I undertook was in the hills - Vagamon area. My fellow walkers were Capuchin Brothers. But, more about that later. What I want to tell you is about a commonplace morning walk with Parvati. Only thing is that it is no commonplace; every walk with P is a session in learning. I have written about this sometime back; this is the next time we walked together after that!!

Among the many quirky pleasures that we share, one that has us giggling like kids is the exciting crawling along the labyrinth of lanes that crisscross the Chalai Bazar. We prowl alongside the little shops that display curious pieces of metal, electronic stuff, wood, and what-have-you. We gaze open-mouthed at a broken down old transistor; we drool over rusty, unidentifiable pieces of wrought iron that once could have been part of anything from an army tank to a pipe wrench. Our hands itch to caress a headless bronze horse which seemed to have stopped galloping when somebody broke its head off. We glance at each other and giggle conspiratorially, about to pounce upon the One-rupee coin size Parippu Vadas and miniature Bhaajis. They can be dropped into your mouth one or two at a time ( or stuffed with several); and the aroma of fried curry leaves and chillies and asafoetida ascend up the nostrils. Titillating!

Chalai Bazar is one of the oldest bazars in the world; well, in MY world. I love it because it fills my senses with nostalgia. The old old provision store from where we long long ago had bought our provisions. The monthly home delivery would come in a pull cart, each item lovingly packed in baskets made of palm leaves. On top of the many different sized baskets there would be a little one with Kalkand ( rock candy), a free treat for the kids such as yours faithfully. That, my young readers, was in the Sixties...

Having a friend or a spouse – or as in my case, a friend and spouse two-in-one - who is a botanist is to have a long but interesting course in the study of plants. You don't have to take an exam, fortunately. Life with P opened up my eyes to the world of plants. So, whether we are walking in the mountains or in Chalai Bazar, we are on the look out for interesting plants and trees. I love to listen to the grand sounding Latin names of the plants – Alstonia scolaris, Ficus religiosa, Ipomea pes tigridis, Ricinus communis – like I said, I don't have to take an exam, so loving the names is fine. 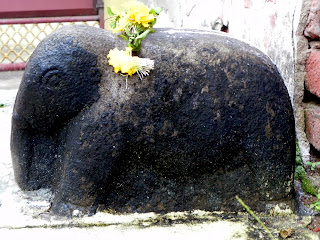 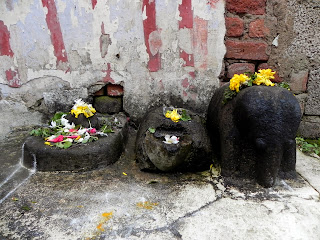 Today, somewhere in the recesses of Chalai, I come across this elephant. I am achingly reminded of the young one at the Elephant rehabilitation centre who is no more. This is in a lane where Tamil Brahmins live – not an agraharam, but a little lane. They wash down the narrow pavement and lay intricate 'Kolam'. This little elephant is placed there along with other stone idols that look like a Siva lingam and a lamp. I learn that the lady who got this elephant from a temple ruin is no more. But the neighbourhood cleans the idols daily and places a few flowers. I wish that Vigneswara temples that throng our country would keep idols of elephants, instead of elephant god. Why not exclusive temples for animals? Trees? Birds? Nature? It was all there in our culture, but now our brothers have fun cutting down trees and tormenting animals.

Just by the side of the cute stone elephant, mosquitoes take morning ballet lessons in the flooded sewer  as I watch. 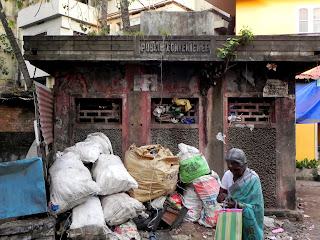 A little ahead,  Public Convenience, courtesy Trivandrum Corporation! P & I laugh mirthlessly at the folly of our authorities. We spend crores  on Techno Park and Rocket Science and Shopping Malls and have an orgasm at the rate of 'development' of God's own country as we so gloatingly call our pretty land but hey, this is what it is, this is what it is. We smear ourselves with filth and faeces, bellow at our Allah-Ram-Jesus-es, Bishops join hands with real estate mafia and encroachers, declare war on Western Ghats and burn up Forest offices - ho ho ho, see how we live in Gaad's own country! 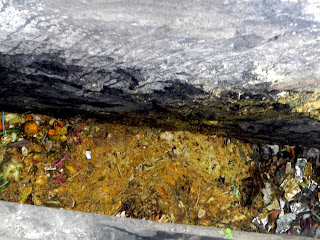 Yesterday's Chicken Biriyanis and Vegetable Fried Rices are having a Kumbh Mela by the side of the bridge; the sewer is steep below the bridge so street dogs are denied a feast. Dogs? Kill them! Massacre them! One fellow even suggested that we start eating dog meat. Doesn't he know that the 'beef' ( now at Rs.220/- per kg) is enriched with dog meat? The 'menace' of stray dogs is man-made. The more filth we let around, the more would be the street dogs.

Then as we bid a quick good bye to filth, this beautiful serene temple – Aryasalai Devi temple. Like a painting.... 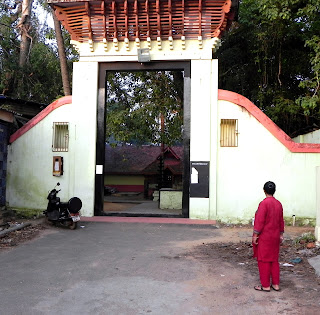 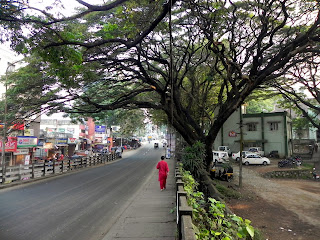 By the side of the flyover near the Thycaud Women & Children's Hospital, shady trees overhang the streets. The trees in the city are being rapidly  decimated. We WANT wider streets for our SUVs! Acres of wooded land near East Fort are going to be cleared for a Shopping Mall and parking space. Like the Hon'ble Collector told us, 'Why do you walk? Use air conditioned cars or air conditioned buses. Who needs wayside trees?' 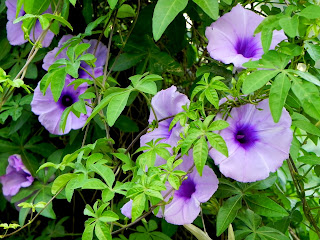 Ipomea
From beyond the wall of an empty plot peep out Ipomea pes tigridis, a common wayside flower, like children poking their heads out of a passing bus. 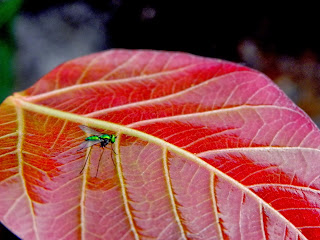 On a leaf of Ficus religiosa (Arayaal) growing out of a crack, a pretty little fly suns herself. She (?) is quite accommodating and poses for my camera. A branch of Ezhilampala ( Alstonia scolaris) with leaves huddled together look up at my camera, bright in the morning sun. 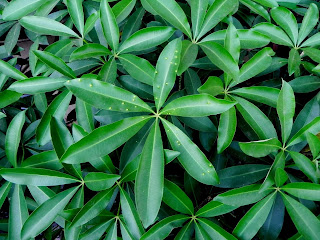 The name Castor gives me nausea. When I was a little boy, there was this monthly purgatory ordeal of swallowing spoonful of castor oil as a laxative. My mother and maid servant would chase me all around the house and compound and grab and pull me down and while the maid would hold my arms down with one hand and clamp down my nostrils with the other, my mother would thrust this 'Gokarnam' between my teeth and then as I choke and gurgle, she would slap down a palmful of sugar down the same way which then would become an oily mess in my mouth and I would be screaming and whimpering and hating the world... But to look at this intricately patterned leaves and the peculiar fruits, I could make peace with Castor finally. 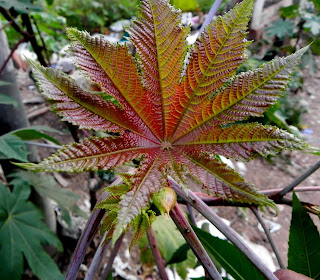 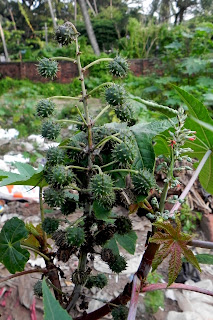 Making peace with the world or with oneself isn't as easy as making love. It is a coming to terms with, an acceptance of the is. It is not necessarily a surrender to circumstances or fate, but a calm, unfluttered gaze around one; and into oneself too. At times, one is irked, but soon lets it pass, because goodness and evil are complementary and cohabitants, within and without.

We pass a couple of stray dogs; they glance up at us. From the way they turned their heads away in disinterest, we could see that they weren't afraid of us, just as we weren't of them. It is that reassurance of security, of live and let live, of the joy in the magnificent and the mundane and the acceptance of good and evil that make life worthwhile. 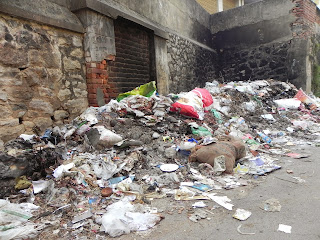