Cycling is Green - and Great! 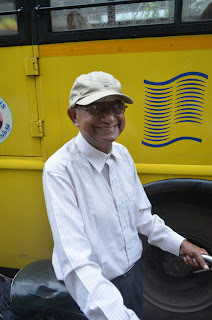 The voice at the other end of the phone was a familiar one - a former colleague from the bank - over the crackle of the background noises he asked me - ' So, how are things? What you doing these days? How do you spend time?'

Ever since I took VRS more than three months back, 90 per cent of the calls I received was the same kind - asking me how I am spending my time. By now, I have stopped getting irritated and reply: ' Answering the same questions that you asked!'

But let me tell you what I did today. Got up at 0530 hrs and cycled about 3kms to Vellayambalam and joined the gathering there, for the monthly cycle rally. Of the 60 plus riders, the majority were from the LNCPE (Laxmi Bai National Centre for Physical Education), the sports centre; competitive cyclists. The rest were like me; older, retired men who had nothing else to do on a Saturday morning! There were a two or three women (other than the sport cyclists). 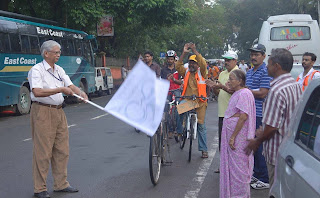 We cycled through the City, for about 15 kms, through Vazhuthacaud, Thycaud, Killippalam, East Fort, Statue, Cantonment, Pattom, Kuravankonam, Kowdiar and back to where we started.  When I learned about the route, I had decided to break off mid-way, before the gradient between Overbridge junction and GPO. But once I took off, I thought what the hell let me try, and  if it is too much, I will push the bicycle. But I huffed and puffed up through it and then the incline at Pattom and Kuravankonam, never stepping off the bicycle. 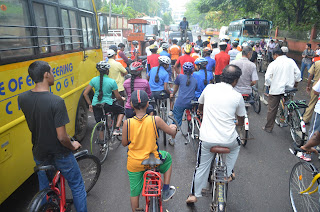 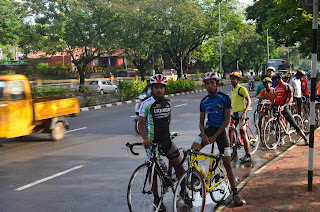 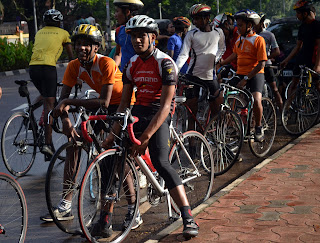 Two police vehicles escorted us, stopping other traffic at the junctions while the four-wheelers and two- wheelers gazed at us, amused. Kings of the streets, we were. For once, none tried to push us to the footpaths. As I laboured up the inclines, I took a peek at the slowly passing buses. The passengers, it seemed to me, looked at us with respect.

Some time in the mid-Seventies, my friend Rahul and I hired a couple of bicycles and rode it all the way to Kanyakumari, 85 kms from Trivandrum. We had promised ourselves that we will not get down at even one gradient. We didn't. Sore-assed, We did the full circuit in two consecutive days. How great was that feeling! Pressing down the pedals, throwing all our weight on to it, we would sway and swing as our knees crackled.

Long long ago. I and my friend, Sreekumar went to Amarnath in the Himalayas. This was in the late Eighties, before  terrorism struck Kashmir. As we struggled up the winding steep path, those who rode horses looked at us with respect and I hoped, envy. Long ago, again with Sreekumar, I walked up the Kailas parikrama, gasping for breath, stopping every 10 steps. There were Yak riders then. Again, I remember the gleam of respect in their eyes.

It is not the achievements in life that is important; what counts is the measure of effort that one is willing to put in.  The respect I noticed in others is actually my self-respect. With every step forward, I strive to redeem myself. 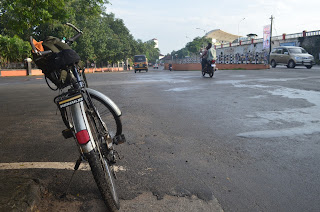 Those who would like to learn more about the cycling scene in Trivandrum, visit http://induscyclingembassy.org/