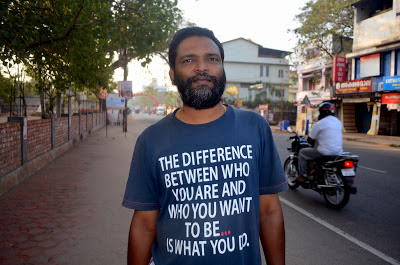 Morning 0630 hrs 24th Jan 2013. As usual on my bicycle. Passing the Dist Court, I espy a man walking towards me. In one swift glance I read his T shirt and move on.   5 secs later, this light explodes in my head and I swerve the bicycle for a 180 degree turn, ride back to the man and pausing, ask - "Excuse me, can I take a picture of your T shirt?'

He tells me he bought it from Trivandrum, no, he is from Alleppey, he is a graphic artist, he would like to look at my photographs some day.

Later in the day, I take a boat from Alleppey to Kollam - by train, it is one and a half hours, by bus two and a half - this boat ride takes eight and a half hours. Leaving Alleppey at 1030 hrs, reaches Kollam at 1900 hrs sharp. Gazing at the life passing by, I muse on the T shirt - 'The difference between who you are and who you want to be ... is what you do.