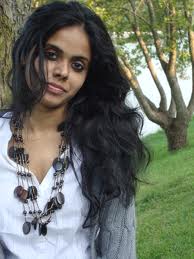 Meena Kandasamy courtesy http://dbnweb2.ukzn.ac.za
After centuries of discrimination, the 'low caste' Hindu, through several programmes of social justice and social emancipation, are getting their equal rights as citizens - the fact that they were kept far out of the mainstream society for generations, oppressed and enslaved and 'untouched' - it denied their children the oppertunities available to those of the 'upper castes'. Through reservation of seats in educational institutions and employment, reduced fees, lower merit requirements and other measures, those belonging to the untouchables/lower castes/ harijans/scheduled castes/Dalits are being ensured of equal rights. All this began after Independance in 1947. 65 years. And likely to continue for decades hence. Fine. Of course, the upper castes may grumble; there are socially/economically backward individuals among them - and now they in turn are robbed of their rights. So it will be.
But - can the same yardstick be applied to art? Lets say - A of the upper caste draws a picture of a dog; and so does B, a Dalit. If for all aesthetic standards, A's picture is better, but since B is a Dalit, should the prize go to B?
Can art be of the Dalit? Can art be of Women? Can art be of the Hindu/Moslem/Christian etc? Should we allow Art to bear such labels? How do you judge a work of art - a poem/ a sculpture/ a painting/ a song/ a story/ - whatever? Would it be for its quality as a work of art or for its political/communal/ jingoistic/parochial considerations? Would you rate a work of art by a man and a woman on the basis of sex?
Meena Kandasamy is a Tamil Dalit poet. ( since when did we stop saying poetess/ actress? In what way do we discriminate here? Or does gender discrimination end if we say female actor? Is it sexist to identify a person on the basis of sex? If there are only actors, so be it, but awards should be only for the best actor,irrespective of sex ) She was in Trivandrum yesterday in connection with the release of the translated version of her collection of poems. Tamil Dalit poet. Tamil - you need that to distinguish the language she uses; it is also useful to understand the cultural milieu she belongs to. Dalit - it denotes she belongs to a group of communities - socially/economically/politically/ etclly backward. Do we need to know her caste to appreciate her art?

Maybe before you read a poem, you should learn the religion/community the poet is from - and set your mind accordingly.
I am writing this based on a report in the Malayalam daily, 'Mathrbhumi'. The Malayalam poet/activist, Smt Sugathakumari had been invited to do the honour of releasing the collection of poems ( translation by V S Bindu). Sugathakumari was given a copy of the book on the previous day of the function. After reading a poem in the book which was contemptuous of Mahatma Gandhi, Sugathakumari informed the organisers that it will be against her conscience to release a book that depicts Gandhiji badly. She refused to attend the function stating that she cannot be a party to it.
The poem begins by saying that it is incorrect to call him 'Mahatma'. It says that Gandhi's laugh is 'eerie' (Bhayanakam). The poem ends with 'Bapu, Bapu, kodiya vanchaka, njangal ningale verukkunnu' - Bapu, Bapu, you big fraud, we hate you. She calls Gandhiji a sadist, impure, imposter etc. Meena was 17 when she wrote this. She says she wrote it after reading Sylvia Plath's Daddy.

Gone half-cuckoo, you called us names,
You dubbed us pariahs—“Harijans”
goody-goody guys of a bigot god
Ram Ram Hey Ram—boo.
But they killed you, the naked you,
your blood with mud was gooey goo.
Sadist fool, you killed your body
many times before this too.
You can read the full poem here. http://meenakandasamy.wordpress.com/2008/06/01/mohandas-karamchand/

In her speech Meena Kandasamy criticized Sugathakumari for refusing to release the book. Sugathakumari said she has her own values and principles and considers Gandhiji as her Guru and nobody can demand that she destroy her values.
Meena Kandasamy has won awards and accolades for her poetry. She has a PhD in Sociolinguistics.
Gandhiji brought all the 'Untouchables' together and called them Harijans; the children of God. they now call themselves Dalits. Who bears the stigma? Who still carries the brunt of casteism in their minds? All of them; upper and lower, Brahmin and Dalit.   When the name is changed from Harijan to Dalit, would the pain and hurt vanish?  So long as one identifies him/herself as 'belonging' to a caste, this schism would persist.  If it was not for Gandhiji, what would have been the history of the present Dalits?
I have read Meena's poems and found some quite good. And that has nothing to do with the fact that she is a Dalit or that she is an attractive young woman. But Gandhi-bashing is quite fashionable among Dalits, it seems. It gets you applauds and cheers from some members of the Dalit communities.
To me, since the time when world began there have been the oppressor and the oppressed. In some countries it is White and Black, in some Shia and Sunni, in some Protestant and Catholic; in most, the rich and the poor. One day it is the Brahmin and the Dalit, next day the roles reversed.