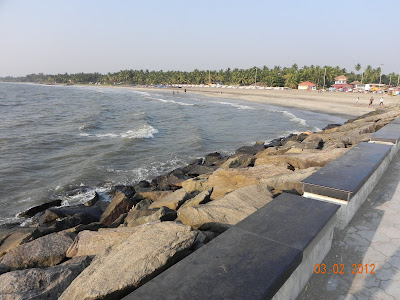 "Beypore is a ancient port town and part of Calicut municipal corporation in Kozhikode district in the state of Kerala, India. This place also has a marina and a beautiful beach. Beypore port is one of the oldest ports in Kerala from where trading was done to the Middle East. Beypore is also famous for building wooden ship, it is called Dhows or Urus in Malayalam language. These ships are usually bought by arabmerchants for trading, fishing and now used as tourist ships. According to Captain Iwata, founder member of the Association of Sumerian ships in Japan, Sumerian ships might have been built in Beypore. There are evidences to prove that Beypore had direct trade links with Mesopotamia and was a prominent link on the maritime silk route". (Wiki) 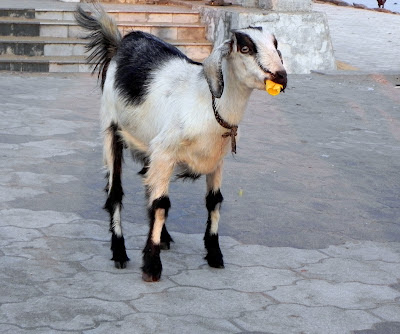 The goat trotted up straight to me and demanded a share of the snacks. Behind her came her friends. I thought I had seen it all; I have seen dogs, cats, monkeys and men doing it, but a goat, twitching its stub of a tail! 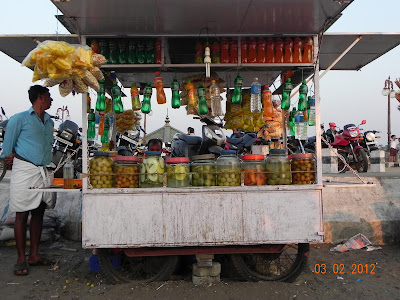 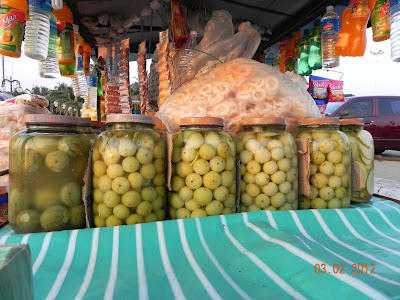 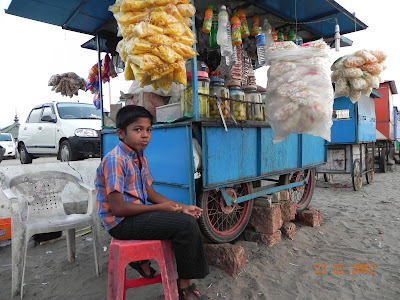 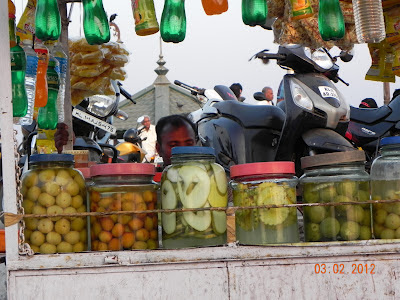 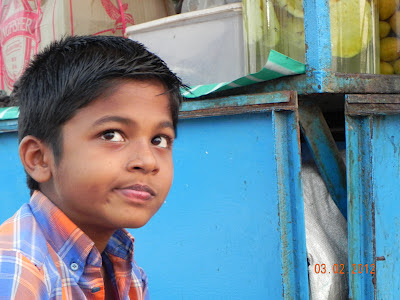 The large glass jars looked ancient; so did its contents. Pickled pineapple, gooseberry, mango, carrots - Rs.3/- apiece. I try a piece of pineapple; salty, tangy, its good. But I liked the little vendor more. In between selling his wares, he himself enjoyed chewing on a gooseberry. 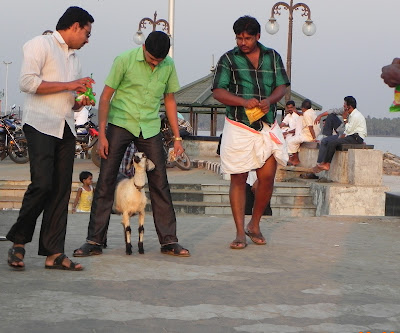 Everytime I see people playing with animals, my heart melts; my face softens. Those are the only occassions when I feel love for humans. 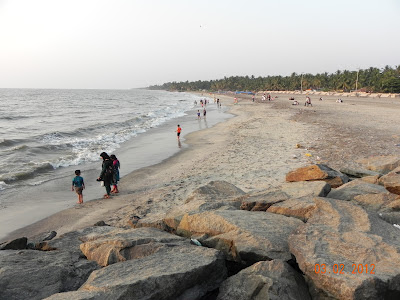 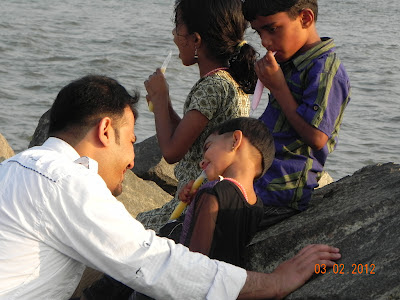 Look at the people at a beach; or at a picnic in the woods. They look relaxed, happy and at peace. Yet they take nature for granted and do nothing to protect it. 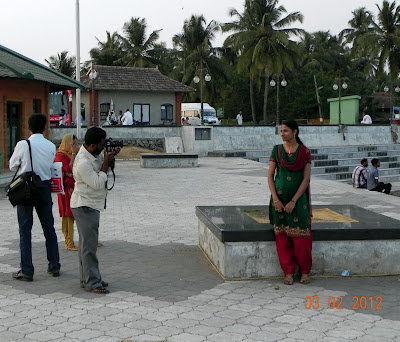 Prelude to matrimony, I guess, for the wedding album. I have seen such hilarious scenes - the couple are asked to pose, act - they walk around in the gardens or beaches like the hero and heroine of a movie. Albums full of pictures, CDs- I sometimes marvel at the naivety of humans! 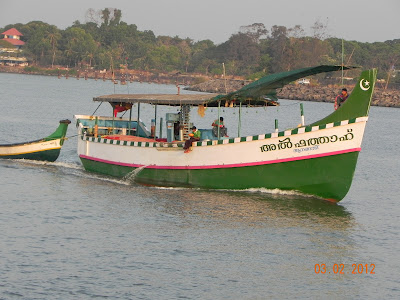 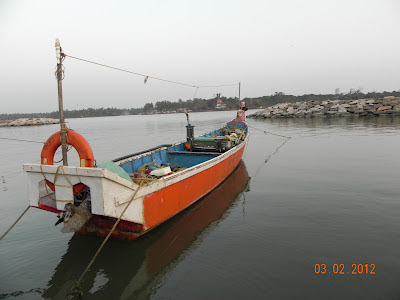 It is not the classical Dhow that made Beypore famous, but this was the best I could get.  Those readers who would like to know more about Beypore and Dhows can read it in this blog. 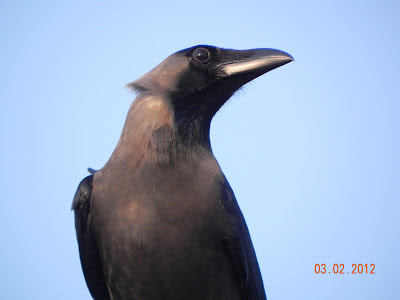 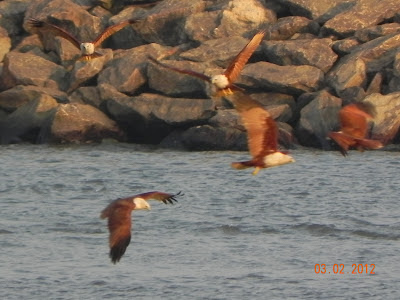 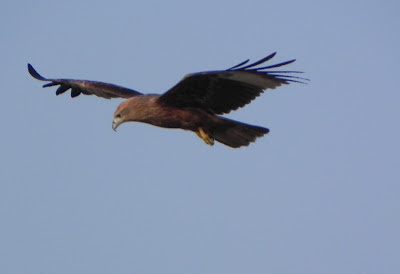 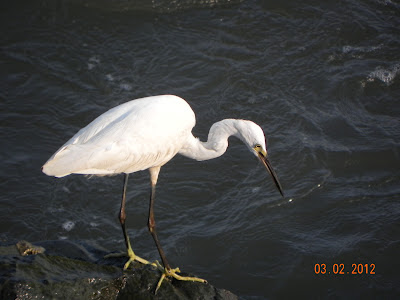 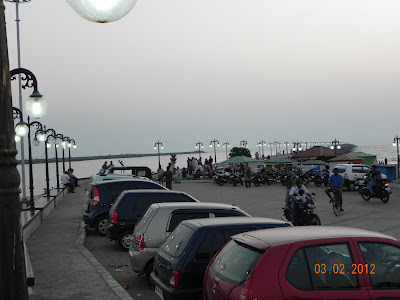 Pathway built into the sea stretches for a kilometre. As dusk falls, the lamps go aglow, and night creeps in. 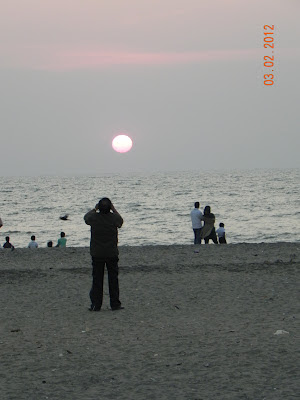 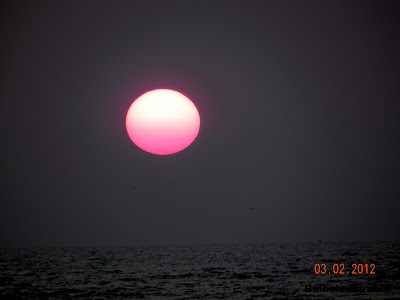