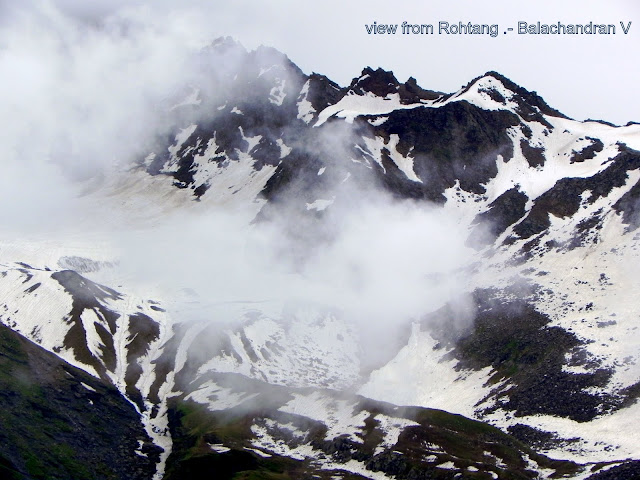 In the newspapers today, there was yet another tragic news. Three youngsters in their early 20s, software engineers working in Infosys ( that is one of the ultimates, isn’t it?) died in a car crash. Two others are seriously injured and fighting for their lives. One of the deceased was the daughter of a Malayalam movie director. She was 23.
We dream, plan and then execute. So it is for our future, so it is for our little journeys. We secretly believe that nothing is going to happen to us; tragedies are for the rest of the world. I have not traveled far and wide, but well, more than many of my age and situation.  I cannot honestly say that I have been free of dread; fear of accident or loss of life, though it is not for myself but for the sorrow that could befall those who love me. But, honest, this fear was unknown before I got married and had a child. I used to be reckless ( P says still am) in driving  as well as in decision–making.  Now whenever I go for a long trip, I am torn between the desire to move out and the pangs of being away from my family.
Risk is inherent in every act. So many have died choking on food, while driving cars, while swimming, while – well, sleeping, as my brother-in-law did last week. But the risk factor doesn’t deter us from what we want to do, does it?  The degree of risk, of course varies. One assesses risks on the basis of one’s capabilities to overcome. I’d be stupid if I were to jump into the ocean and swim the Palk strait or something. But give me a Royal Enfield Bullet Bike – I tell you, if you can provide me the logistical support, here I am, ready to ride the bike to the ends of the world!
The young kids who died in the car crash would have never dreamt that their lives were going to be so brutally cut short. Who’d think of death at 23, unless you are a schizophrenic or something?
But we got to live. We got to live as if we will never die. There is always a chance we will be alive the next moment, next hour, next day, next year…
When we started off from Manali on the 9th of July, we had no inkling of what was to come. Gopi and I discussed about the places we should go, the things we should do at Leh. ( us being veterans of Leh, all the other three could do was to chaff at the reins). Starting off at 0500 hrs ( I had frowned at this late hour – I had suggested at least 0300 hrs- always start early and reach early  in the mountains. Never travel in the afternoons.  My Thumb Rule #1) we reached Marhi, the watering hole below Rohtang Pass. Far above we could see the long winding queue of vehicles. At the tea shop where we had our Aalu Paratha, Rajma, Omlette and Amul Butter, we were told that the traffic block up in the Pass has been there since yesterday. In no time we cover another 8 kms and joins the traffic block. The time was 0730 hrs. 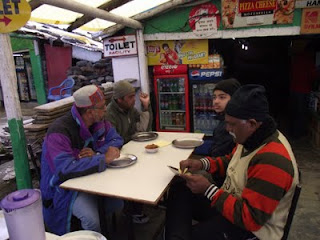 (Aalu Paratha #2, with Rajma- wiping off the last bit)
The narrow roads of Rohtang Pass had deteriorated in many places due to the monsoon showers. Slush and mud and glacial streamlets running down and the invariable landslips that were hurriedly cleared  by the GREF marred the roads. The large majority of the traffic constituted of tourists going up to Rohtang Pass. That was the last point of the tourists who would walk the glacier, frolic in the snow and pose on Yaks. The rest were the trucks, buses and other vehicles like ours going beyond the Pass to Keylong and further to Leh. In their hurry to get ahead, there were two, at places three, lanes of vehicles going up. There was no sign of downcoming traffic. 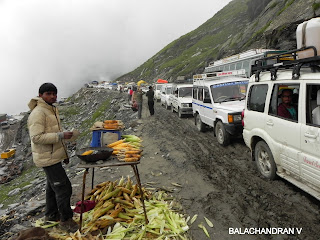 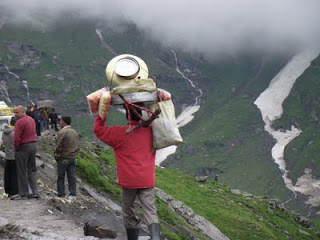 Time moved on. Sometimes we would inch up a few meters. The only vehicles that were coming down or moving up ahead were the occasional bikers. They would stagger through the mud and negotiate the treacherous path while the bigger vehicles looked after them with envy. I look at the riders all helmeted and jacketed and carrying loads and the mud splattered on their boots and trousers and the haggard look and the burning concentration on the rutted path and the deep thumping of the Bullets and the wind – I had done this 4 years ago, almost to the same day. How I would love get my hands on one of these bikes! 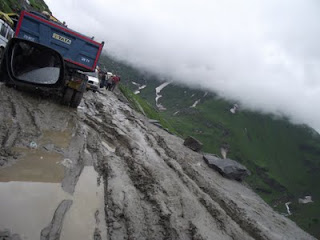 1730hrs. We discussed. As per our original plan, we were to reach Leh in two days, spend 4 days there and catch a flight back to New Delhi on 15th morning.  We had two options; either to stay and see the night out and hope that the Pass will be cleared the next day. I personally had no other option in my mind. Those who have been with me in the mountains know how transformed would be my personality in the heights. I am no longer the wishywashy Charlie Brown I am in the plains. I am in my elements up there. I tell my friends to store up water, buy whatever food available ( there are Corn vendors, 'Biscooth' vendors who have come up to the Pass from the villages down below- a coffee costs 20 bucks, an omlete, 40! ). Somebody called up our friend, Hari, a former mountaineer in New Delhi. Hari advised caution. Somebody called up Gopi's friend in Manali, the trekking instructor; he advised - return to Manali. 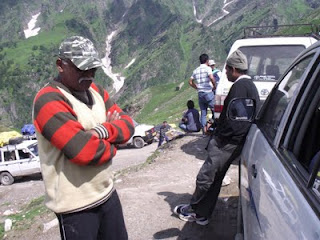 We inched up our way till 0030hrs midnight. By then, the intermittent drizzle had strengthened. It was very cold and windy. We were nearabouts 10000 ft. Then we reached the exact spot where the largest landslide had occurred. Between the partly cleared rocks and the chasm on the other side, there was just enough space for a car to squeeze through. The few policemen posted out here were there since couple of nights, sans food and sans sleep. Bulldozers tried to push the vehicles sunk into the mud, up the incline. Four-wheel drives could go up, but cars like our Innova slid backwards, dangerously close to the edge of the road beyond which there was nothing. Then the skies opened up.
We are shut inside the car. In the darkness, to my left I can see the tons of rocks and mud that had slid down from the mountain side. To my right, again, nothing but the chasm. 'This could be it', I told myself. I have been caught in landslides in Himalayas before, but not this uncomfortably close. Then a policeman came and rapped at our windows. 'Go back', he said. 'it is too dangerous to be stuck here now. The rains can bring down another landslide, get away, get away', he said. Our driver, Prem Thakur, is an unbelivable expert. He managed to reverse the Innova – I could hear the tyres slipping, the engine screaming, as we slid closer and closer to the edge. Men came out from the night, from the other vehicles and manually lifted the car and turned it around.
Even Gopi and I were shaken. We were a bit too close – to death. Smoking my umpteenth Gold Flake Kings, I imagined the little obituary in Malayala Manorama... But never say die; I suggested that we go down to Marhi and wait the night out there. Anyway it was already 0100 hrs and we could snooze in the car. We could come up again in the morning. But I was voted out. We returned to Manali, to the same beautiful guesthouse and slugging a couple, went to sleep... We decided to wait till the weather improved and the Pass opened up and try again the next day.
To be continued ....
Posted by Balachandran V at Tuesday, July 26, 2011