The Self and I 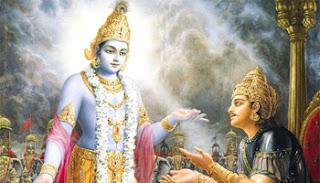 Those of you who have been following my blog might be amused to learn that long ago I nearly became a monk. It was a tumultous period in my life; I had been reading up a lot of philosophy and spirituality – I was in my early 20s, the age when one comes face to face with the harsh reality of life and hardly equipped to face it – disillusionment led to seeking help in spirituality.
I was working in the Bank at Chidambaram, Tamil Nadu then. I saw this advertisement – A Call to the Enlightened Youth of India – Vivekananda Kendra of Kanya Kumari was inviting applications from young men and women to become missionaries – not religious but service to the backward sections of the society. They would give training for 4 years during which time you cannot go back to your previoius life. After completion of the course, you will be send to their missions at Arunachal Pradesh and other North-East states. You will have to work there, teaching, helping etc.
In the frame of mind I was then, the appeal appealed to me. I applied. They wrote a kind letter thanking me and asked me to reassure myself the genuineness and earnestness of the commitment I was about to make. They said you should not discard your present life only because you are disenchanted with it – the missionary work is not an escape from anything. Join us only if you really want to do service. I said- Yes. They wrote back asking me to attend a one-month programme at Kanya Kumari and decide after that. So, in early 1981, I went there.
There was nothing Hindu about the entire thing. They had discourses on Vedanta, philosophy. We had to practice Yoga getting up at 0430. Vegetarian food, good people, Bhajans from Vedas and Upanishads, no picture or mention of Hindu gods or godesses except for talks on the philosophical aspects of Ramayana and other Puranas. The participants were asked to give a small talk on something spiritual. I was perusing Bhagavad Gita those days. There is one sloka /stanza in Gita which struck me as the very essence of conduct of life. Even now I think of it, brood over it ; I think I gain strength from it every time I remember those lines:
I quote the following from a page I found in the net:
uddhared AtmanAtmAnaM AtmAnamavasAdayet
Atmaiva hyAtmano bandhuH Atmaiva ripurAtmanaH

Bhagavad Gita 6.5
meaning:
One should raise oneself by one's Self alone; let not one
lower oneself; for the Self alone is the friend of oneself,
and the Self alone is the enemy of oneself.
This verse has a general application to human life. It may be
understood to express the well-known truth that every person
is the shaper of his/her own fortune. It may also be taken to
represent the popular english sayings: You are your own best
friend and you are your own worst enemy.
The mind is the one that grasps the external sensations. Our
intellect, buddhi, interprets these sensations and creats one
of several pairs of opposites that comprise the jagat: I like
this, or I hate this; it is enjoyable, it is dreadful; etc.
If a thought repeatedly makes a visit, it becomes a huge tree
in the mind with its own sub-branches and it becomes very hard
to dislodge. In these cases, AtmA (here, I interpret AtmA as
the buddhi) is the worst enemy.
The intellect, buddhi, is your best friend, when these pairs of
opposites are not generated. That is, the intellect has almost
reached a perfection stage where it can distinguish real and
unreal, that is, it has nityAnityavastuviveka. In that case,
AtmA is a bandhuH, that is our biggest asset.
Swami Shivanandaji comments on this verse "... Friends and
enemies are not outside. It is the mind that makes a friend
an enemy and an enemy a friend. Therefore, the Self alone is
the friend of oneself, and the self alone is the enemy of
oneself. The lower mind or Ashuddha manas (impure mind) is
your enemy because it binds you to the saMsAra, and the higher
mind or the sAttvic mind (shuddha manas or the pure mind) is
your real friend , because it helps you in the attainment of
moksha."
To me, moksha is release from bondage of the mind. As long as you are alive, you are bound to your body and all the physicality of life around you.
For us ordinary mortals, it is so easy to find solace for our misfortunes in life by blaming others. How often have we heard; My parents didn't do that, my brother didn't help me, my friends forsook me, life has not been kind to me, I am so unlucky etc etc. If we sit down and think it all over for some time, we would realize that we really cannot blame anyone or anything else for the fluctuating fortunes of our life.
In my solitary travels to the mountains where I could be with myself, I often rote these lines from Gita. Rather than pray to some entity, I let myself loose into the strong, cold winds that sweep by me and in that state of lightness, that state of freedom, that state of total understanding of myself, I bow to the currents that made me who I am...
***********
PS: In this connection, I would like to share with you a poem that has influenced me since my teens; influenced in the sense that I chose it as my dictum.
Invictus - by William Ernest Henley

Out of the night that covers me,
Black as the Pit from pole to pole,
I thank whatever gods may be
For my unconquerable soul.

In the fell clutch of circumstance
I have not winced nor cried aloud.
Under the bludgeonings of chance
My head is bloody, but unbowed.

Beyond this place of wrath and tears
Looms but the Horror of the shade,
And yet the menace of the years
Finds, and shall find, me unafraid.