A Photograph and a Face 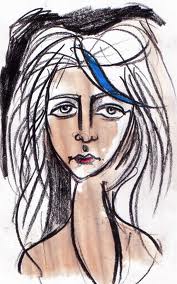 For the last two months, work had been hectic in the Bank. We have been giving loans to women’s Self Help Groups. Women of a locality form a group and sums of 2.00 lakhs and above are advanced to the group. They will in turn disburse the amount among the not-above-20 members of the groups for cottage industries like pickle-making, pappad-making, sewing or such other activities that the unemployed housewives and women can do at home. There is a liberal subsidy; the balance amount is supposed to be collected and repaid monthly by the group. Cynical that we are, we do not expect most of the accounts to be regular in repayment. Quite likely they will default and the Bank will eventually write off the dues. As Kalmadis and Pawars and Rajas fleece the country of thousands of crores of rupees, we shrug and say, well, let the poorer sections of the society too get their tidbits.

Every day no less than 50-60 women throng the banking hall. Savings accounts have to be opened first in the name of the SHGs; many of the ‘Presidents’ and ‘Secretaries’ are illiterate or semi-literate. Many of them don’t even know their dates of birth. We scan the Ration Cards and flippantly give one – 01.01.1965, 01.8.1975 etc. The women come with their bawling babies, kids with running noses, grandmas who sign III, young girls in their best attire. Women who have chaffed fingers with dark dirt beneath their fingernails (I notice the fingers because they sign the documents sitting before me), many wearing cheap gold-plated fake jewelry, garish saris. Women who have aged too fast. I look at their identity papers with photographs taken when they were young. Is it a misconception that I have that all women are pretty when young?
Young women with beautiful yet sun-burnt, darkened faces and bearing the brunt of hard work. Middle aged women with sagging breasts and roughened, wrinkled skin. Young girls with upturned breasts demanding to be noticed. Muslim ladies with head scarves and prim faces as Presidents and Secretaries of groups strangely named as Sivasakthi or Devi sarnam or Kailasam.
I was polite and courteous in the initial days, but as the crowd continued to flow in unabated I eventually got tired talking to them and correcting the innumerable mistakes. The main problem was that I couldn’t attend to our regular customers. Many a time they had to be kept waiting or asked to come at a later date because of the SHG crowd. I began to be irritated at the slightest error made by the women. I would curtly tell them to get the documents corrected and properly filled up. It was exhausting me.
Yesterday was the same. The women come, sit in front of my table. I could see they are awed and ill at ease. I hardly look at them; flipping through the forms I mark the errors and omissions, make them sign at the proper places and pass it on to the counter staff. Then a woman came and sat before me. I fired off the usual questions, flipped through the documents and then suddenly I am struck dumb by her photograph. She was not exceptionally beautiful but the way she looked at the camera and the brilliance of her smile lit up the photograph. Red saffron was sprinkled too liberally on her forehead. There was laughter in her eyes; the way she cocked her head sideways and the sparkle of her smile reflected her happiness. I couldn’t pull my eyes away from the photo; suddenly I became conscious of her sitting before me and glanced up at her face.
I looked at her again. It couldn’t be the same person. She looked like a pale ghost of the one in the photograph. She wore no ornaments, no bindi. There was no laughter in her pale eyes and down turned lips. Life, I could see, had not been kind to her. There was a dazed, resigned expression in her eyes; they were dead.
Suddenly I felt my irritation draining away. I felt contrite for being curt to the point of rudeness to some of these women. Who am I, a petty bank official, acting like a stuffy bureaucrat? How many times had I stood before the likes of me, in the same humble, apologetic manner that these women do, before me? I even wrote a poem on bureaucrats.
True, many of these women are here for a swindle. Over the last more than 30 years in the Bank, I have seen it all. ‘Government loans’ need not be repaid, they would be advised by the local politician or councilor. Inside most of us lurks a Suresh Kalmadi or Karunanidhi or Raja. Many of us are not one because we didn’t get the opportunity or because we aren’t ‘smart’ enough to be one; a few of us may be the genuine nickel. Yet, one has to remember that for every Suresh Kalmadi, there are thousands of genuinely needy people out there. Thousands, nay millions, who have been cheated out of a decent existence. For every Raja and his wife, there are thousands of families who struggle to eke out a living. For every Tharoor and a fraudulent, flirtatious whoever-his-wife-is, there are millions who cannot not dream beyond a three-meal day. One has to serve those millions.
*********** Balachandran V, Trivandrum, 27.04.2011
http://mytravelsmylife.blogspot.com/2010/05/before-bureaucrat.html
Posted by Balachandran V at Wednesday, April 27, 2011