Falling in love with Parvati 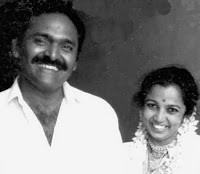 Yesterday we had been to Kottayam to attend a marriage. P had left a couple of days earlier; she wanted to reconnoiter some research project she wanted to do at Panjal. We met at the wedding and returned together. In the comfort of AC Chair Car, we dozed; outside it blazed – summer is coming up fast. Waking up, I look at P, sitting cross-legged on the reclining seat, head bent as if deeply pondering over the mysteries of life, except that the crookedly perched spectacles gave away the truth.

50 plus, both of us are getting to be real middle-aged. Several of our older generations have been passing away. Death, that of the old, is of course painful, but it comes with a rider – ‘thank God, he/she didn’t suffer much’ or , ‘he/she had suffered a lot, thank God, its over now’. Soon – or who knows when, our turns too will come, life will go on without us - perhaps we would stare balefully from a photograph on the wall or a death anniversary photo in the newspaper.

I look at P and unknowing to myself, I smile at her. Ours was a cross between ‘arranged’ and ‘love’ marriages – we had met, associating with the same NGO working on nature conservation, became great friends, found that we cherished each other’s company, discovered that we had so many common interests and perspectives – and one day, feverish and sipping a hot lemon tea, I proposed to her when she had come to visit the sick me. Parents agreed to our wish and we had a simple wedding. 30 plus, we were no kids – I had taken a few beatings in love life, she too might have – we were never curious about such things of our past. P had premature grey hair, I had started balding. Both cared nought about pretensions. P in those days walked around wearing cotton churidars except when she had to teach at the College where by convention she had to wear a sari. I always wore a corduroy jeans (my managers used to raised their eyebrows but never dared to point it out) and thick Khaddar Kurtas. She hardly wore any jewellery; I stopped wearing my wedding ring within a month of marriage.

Over the years, we had our share of fights – once we even teetered on a break, but sense of survival prevailed. Or it could be that we were mature enough to let the storm pass for the sake of our son. Tides rose and went. It was mutual affection and respect more than romantic love that sustained our relationship; we instinctively knew we kind of compensated for one another. Along with the common characteristics we shared, we were extremely opposite in many matters. Against her gregarious nature, I was a loner. Against her fiercely possessive intimacy with relatives, I had none; P was God-fearing, I didn’t know much about God. P is practical to the core, aggressive and dominating; I am a hopeless romantic , a dreamer and gives in too fast.

But the boat didn’t go down; it rocked once in a while, but we never lost the oars. We fly into terrible arguments ( K always says that he was inspired to study human psychology because of us) but after a few hours of sulking, we patch up.

I look at Parvati; her legs are a bit short to stretch and reach the foot rest beneath the seat in front of her. Sitting cross-legged and dozing and nodding, she looks like as if she is chanting and meditating at a religious gathering. A spurt of a snore escapes her mouth. I move my left hand to touch hers; a gentleman sitting on the other side of the aisle gets ups and tells me – ‘Sir, excuse me, but your wife’s Pallu (Sari’s end) is trailing on the floor. People are stamping on it as they pass’. P wakes up with a start, grabs her Pallu and goes back to sleep. She turns to her right, holds my arm and lets out another snort in her sleep. I do not move my arm away. Outside the sun is setting over the Ashtamudi lake as we pass over the scene of Perumon train tragedy.