The Theory of Impermanence 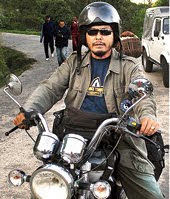 ‘Death. My favourite topic. Been wondering about death ever since my hormones started jangling. Why? When? Where? There was a time when I used cower with fear thinking about my final moment. Now, after a few brushes with the event, I find myself pretty calm about it. Maybe that’s the only real progress I have made in life. I am beginning to grasp the theory of impermanence. The holy detachment to everything, including one’s life.’

I have never owned a car. My father had one long ago. It was a Studebaker Champion, circa early 1950s model. I was a little kid then, in my primary classes. I remember that huge black car; I had to walk, to reach from one end to the other of its rear seat! The longest trip we went in the Studebaker was to to watch the Dussera, in 1964 or 1965. As an adult, I could have bought one, but somehow I didn’t. One of the reasons was that my ancestral home in the heart of the city where I have lived on and off for the last thirty-three years didn’t have car access. And the boy in me always preferred a two-wheeler.

Ask any bike aficionado. The exhilaration that a bike ride offers is far more than a ride inside the cocoon of a car. Exposed to elements, the intimacy with the surroundings is something hard to get in a car. There is something raw about riding a bike. As Pirsig would have said, there is oneness with the rest of the world. So I have gone around in scooters and motorcycles. Given a choice between a Mercedes and a Harley-Davidson, I would opt for the Harley, any day.

I had never met Mr. Tenzing, though both of us have spent considerable number of years in the same place, . I, as its native and Mr. Tenzing, a native of , as an IAS officer in Kerala cadre. I don’t particularly remember seeing his name for the nearly 20 years he was in Kerala; probably because there are so many IAS people around and that too from other states. The first time I noticed his name and read with interest about him was when he resigned from the coveted position of the head of a Government department in 2006, straddled a Royal Enfield Thunderbird motorcycle and rode all over for a period of 9 months, clocking 25320 kilometers. Mr. Tenzing was a fellow biker. That is something I would do, if I had the guts and the money. He published a travelogue of his ride across the country. 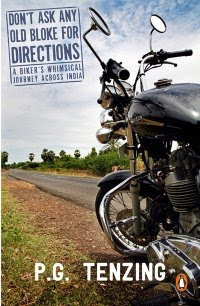 Mr. Tenzing is no more. He passed away on 26th July 2010, at the young age of 46. He had terminal cancer of the blood. I read eulogies about him, how good an officer he was, how charming, friendly and absolutely in love with Kerala, about his long ride.

Reading the book is like riding the pillion behind Mr. Tenzing as he speeds his bike fast and furious across . Everything passes in a blur, except the sketches of people whom he meets en route; former friends and new friends that he made on his whirlwind tour. If you are looking for detailed description of the places he went through or its history or for introspective reflection on the philosophical and spiritual aspects of traveling, you have come to the wrong book. The book accelerates at a high speed, with short breaks allowed for peeing. Mr. Tenzing took only 16 hours at a single stretch to go from Leh to Manali, which I did in three days. Not that I cannot, but my idea of biking is more of the cruising kind, relaxed, laidback riding. Perhaps Mr. Tenzing knew that he didn’t have much time left.

But there is a great pleasure in living life on an impulse, which is something that ordinary mortals can only fantasize; something only a few like Mr. Tenzing could do. You sigh, as you read the last line of the page because you realize that this is something you will never dare to do.

There are certain images that you retain in spite of the racy ride. Mr. Tenzing’s great love for Kerala where he spent most of his adult life, his amusing irreverence for politicians and officialdom, his courage in chucking the most prestigious job in India, his deep feeling for Sikkim, the caricatures of people whom he introduces to you and the darkness of India as he passes through Bihar, Jharkand and UP. His language is fluent and modern. There is rapidness in his words like the revving of a bike. Yet Mr. Tenzing exposes himself at an unaware moment or two; like when he mulls over the death of a cousin and his own death.

Mr.Tenzing - can I call you PG, like your friends did? – PG doesn’t mince words when it comes to criticizing the baboos and politicians and the Great North Indian Attitude. His verbal slaps are, for the reader, a cause for huge merriment. PG is sitting in a hotel somewhere in Himachal being served by a fellow from Andhra Pradesh in south waiting for a rainout. Listen to him: ‘The locals said that the rainfall was too heavy and the summer too hot. Same old climate-change gripe. We’ve fucked up nature big time and now we must pay the price. I cannot understand the reluctance of the big business lobby – especially in the – to acknowledge the problem and to take steps in concert with the rest of the world. Those guys are going to get rid of the human species one way or the other. By climate change or nuclear holocaust’.

It is good to learn that such a man lived among us. A man who dared; and cared.

I am leaving it here, PG. If people want to read you, let them. Who knows, some youngster might be inspired by you; and another, yet another… 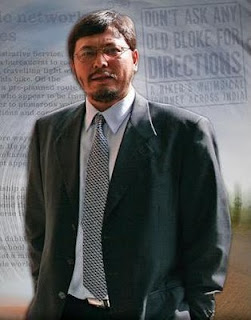