The Consolation of Music

I have reproduced an article below . I could've just given the link, but some may just not bother with it; I don't, at times. Do read it. And reflect upon it.
STAR WEEKEND MAGAZINE

A Roman Column
The Consolation of Music 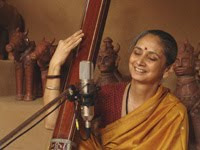 We can talk about human suffering, steep ourselves in it; or we can talk about things that ease the suffering-- even momentarily, and lift us from the physical to the spiritual plane. I am temperamentally inclined to choose the latter, to distract the pain. As a writer I feel helpless, useless, in the face of all that my fellow human beings all over the world are going through every minute. But what can I do to help? Nothing, except talk and write about it some more.

Take Dhaka's situation regarding electricity cuts and water shortage. From family and friends I hear stories of discomfort and also the stoic manner in which people are bearing this cross. I would happily turn off my own electricita and l'acqua for a few hours a day here in Roma if it ensured the availability of the same to my loved ones in Dhaka. But neither this nor my writing will solve anything.

Take Northern Europe, under a cloud spelt Eyjafjallajokull. I feel sorry for all the people whose lives are affected by it--those living in the vicinity of the belching volcano and those travellers marooned in airports by stalled airlines. I have friends with stories, sad stories, frustrating tales, or just the simple account of the mother looking forward to a son's long expected visit now literally ashes in the mouth. My writing will cause neither the cinder nor the cloud to disperse.

The other evening, here in Rome, I attended a memorial service that touched my heart and my mind, reminding me how our common humanity can be celebrated in new ways and across religious diversity, if we are a little open minded and culturally creative.

Recently, the Indian Ambassador to Italy died in a Roman clinic in a galloping case of terminal cancer, discovered too late. His body was flown back to India, where as a Muslim he was buried according to Islamic traditions. After that his widow, a lady of amazing strength, equanimity and grace, returned to Rome to pack up. Before she left, Farida held a 'remembrance' service for her deceased husband at the official residence, and to thank the medical team that had attended on her husband.

We did not know the couple well, but I had met her a few times socially with my girl friends, and the last time was after hearing about her husband's illness. So, I felt it a human obligation as well as a duty as a fellow Muslim to go and offer my condolences and prayers.

I had earlier heard that a famous Sufi singer from India would also be coming, but since that was irrelevant to the purpose of my visit I did not bother to ask the name of the singer nor how he or she would fit into the evening's programme.

At the entrance Farida greeted everyone with a bravely smiling face. The words I wanted to say seemed inadequate, so I embraced her instead. "I'm so glad you came." She said simply.

Everyone was directed into the huge drawing room, one part of which had chairs in rows, while the front half of the room was empty, its floor covered in white sheets. I chose to sit on the floor along with the embassy officer's wives and a few other Indian guests. The chairs behind us filled up with Italians, and other international and sub-continental acquaintances of the hostess.

Soon a tall, fair and distinguished gentleman in a business suit topped with a flowing grey robe and looking more like a priest of a church came to the front and sat down with crossed legs.

"That's the Imam of the Mosque," Someone beside me pointed out. Rome has just one mosque, the one to the north of the city, on the Via del Moschea. While he was settling down and I, still bare-headed, was searching the faces behind me for some mutual friends, I observed that all the ladies around me, all Hindus, quickly covered their heads with their dupattas and saris. I pulled up the anchol of my sari over my head and sat back to listen to the clear voice of the Imam reciting from the Quran. I glanced around me and was moved to see the reverence with which all the non-Muslims bowed their heads, and listened to the recitation in silence. I was disappointed that the Imam did not translate the Arabic words into either English or Italian, since apart from myself, Farida and her family and another Bangladeshi couple, there were no other Muslims. The rest, a crowd of thirty or so, was either Hindu or Christian.

At the end of his recitation he raised his hand in Munajat and asked the gathering to say "Aameen" after every line he uttered. As soon as he started to chant, the company faithfully and in a loud chorus interjected at the appropriate places the response. The Hindus never faltered nor did the Christians pronounce it in their own way of 'Amen'. The voice of unison that resounded in the room, even though it belonged to another faith and didn't understand the language of the prayer-supplication, it was unanimously: "Aameen".

It was for me a moment of perfect harmony and communion with my fellow man, rising above differences of convictions. But more was to come, for as soon as the Imam got up, a fragile looking lady in a sari, with her head covered came forward with her tabla player and musician, and did salaam and namaste, both.

She was introduced as the famous singer Vidya Rao. In a delicate and melodious speaking voice and in immaculate English she explained the Sufi songs and ghazals that she would present. It was to be a feast of the spirit, a musical treat.

Trained under the famous Naina Devi, Vidya was, like her guru, an exponent of the thumri and dadra style. A devotee and practitioner of Bhakti and Sufi music, she was not only a singer but also a writer who had penned many scholarly articles and essays-- on Mira, Kabir, and Khusro, among others.

"Thumris speak of the pain of existence, which is our greatest joy and the eternal truth," She wrote once. For her performance before us in Rome, she started out with a ghazal of Amir Khusro that paid homage to my favourite saint, the Delhi-based Khwaja Nizamuddin Awliya.. Whether she mouthed gilt-edged and foreign sounding Persian, chaste urdu, earthy hindi or romantic brajbhasha, she sang with exquisite feeling about divine and mundane love that was one. She ended with a naat, singing with utter reverence about the nabi, the prophet.

As I listened to her I felt that it was possible, after all, to overcome the physical divides of religion and be at peace in the larger truth of shared music and shared faith. We had succeeded for an evening in defeating the man-made strifes and sufferings of the outside world in an internal one of man-made harmony.

Dinner was served, but I excused myself. I had come to offer prayers and condolences and I had been filled with the blessings and consolation of music.
Posted by Balachandran V at Wednesday, November 03, 2010