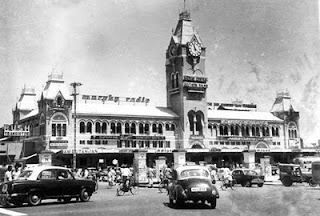 I am on my way from Chidambaram to , via (Chennai). My brother was getting married in ; I didn’t have enough time to book berth in advance. A morning at 0730 hrs found me just outside the closed doors of Ticket Reservation counter of the Madras Railway station. The then system was that the remaining unreserved berths will be given on a first-come-first served basis when the counter opens at 0800 hrs. There was a sizeable crowd waiting for the doors to open. As the counter opened, people rushed in; there was only one counter; hence, one queue. Pushed aside by aggressive berth seekers, I am way behind; I desperately had to catch that train or risk missing the function altogether. Behind me stood a young foreigner, British or American. As the queue inched forward, the typical Indian character, the agent, appeared. For an additional Rs.20/- (A big sum those days) he would get you an assured birth. Of course, he is the agent of the railways booking clerk. I took a look at the queue and immediately assented. The foreigner was watching us and asked me the matter. I told him ‘if you gave 20 bucks bribe, he will get you a confirmed birth’. I still remember the astonished expression of that young man. ‘Bribe?’ he asked, ‘you will give a bribe to get a berth?’. I am embarrassed but defend myself saying that I have to be in by this train. He just shook his head and said, - ‘If I don’t get a berth, I will go sitting’. We parted company. Later, en route, at a railway station, I see him. He got a berth, without paying bribe. I whine, ‘Well, you could afford the risk, but I couldn’t ….. I avert my face, in shame.

Morning 1000hrs. I am at the local Sub-Registry, waiting for a friend who had asked me to be present as a witness for the registration of land that he is purchasing. Well after 1030 the office staff trickles in. I chat up an old man who is standing around. He is a ‘witness for a fee’. For all registrations, whether land deal or marriage, you need witnesses; for a small fee, this man will sign as witness. We watch the office staff coming in. A man and woman, well-dressed and bejeweled climb out of car. They casually go into the office. The old man snickered “ , they are clerks in the office. Do you know how much these people make a month? They are paid hefty packets whenever a land deal is registered. I grimace. ‘Are you telling me that that there is not a single uncorrupt person in this office? All are like this, coming late and picking bribes?’ The old man’s expression suddenly changes from a sneer to awe. Reverently he says, - ‘, come with me. I want to show you someone’. We walk around the building to a side window. With great respect in his voice, the old man points to someone inside. I see a young woman; young she is in years, but the shabby but clean cotton sari, the premature grey strands of hair, the lack of ornaments and that general harried look shouts out age in suffering. The old man says softly – ‘, I have been a regular here for many years. Look at that lady. I have watched her everyday. She comes at the right time, works hard and- believe me, she has not taken a single paise bribe, never!’ In the old man’s face, I see an expression that is hard to describe. 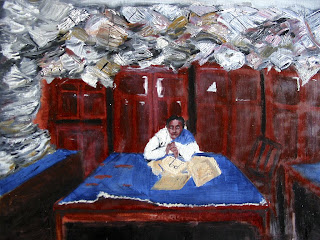