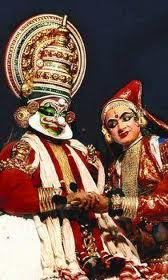 The air was still; the night sultry and humid. The crowd, five hundred or more, sat, lay, stood or just slouched or hung around. Among those who sat cross-legged or knees resting on the chin or legs pulled behind – there was not enough space on the sand-spread ground to be expansive in posture – some slept open-mouthed or curled to a foetus. Those who were awake, looked like zombies, for their eyes were focused on the man and woman on stage, dressed in a totally other-worldly style, The man was beseeching, bidding, requesting, begging, groveling, commanding, lecherously inviting the woman – ‘Come, Malini, come closer to me!’

A quarter of a century ago, my all-consuming passion was for Kathakali, the traditional dance-drama of Kerala. I was fortunate to witness the performances of the great masters of those days – dancers such as Guru Chengannur Raman Pillai, Kalamandalam Krishnan Nair, Kalamandalam Gopi, Kalamandalam Ramankutty Nair, Keezhpadam Kumaran Nair, Sadanam Krishnankutty, Pallipuram Gopalan Nair, Nelliyode Vasudevan Namboothiri and singers like Kalamandalam Unnikrishna Kurup, Kalamandalam Shankaran Embranthiri, Kalamandalam Hyderali, Venmani Haridas and maestros on Chenda and Maddalam like, Kalamandalam Krishankutty Poduval and Kalamandalam Appukutty Poduval - and many many more. I give their full name and title of their school here out of great respect and admiration. Most of the names above are no more – like my favourite phrase in Malayalam – Kalayavanikakkullil maranju - they have vanished behind the curtains of time. 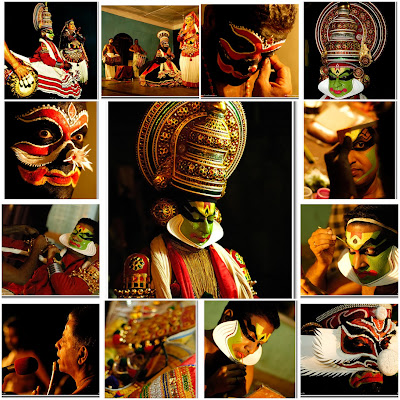 The scene described above is typical- could have been any one of the innumerable performances I watched in those days. The programmes began at 2100 hrs in the temple grounds and would go on till the wee hours of the morning. The audience, packed at the beginning would thin around midnight; only the true aficionados (they call us Kathakali Bhrandan – Kathakali Nuts) would sit up wide-eyed, chewing pan or smoking beedis throughout the night.

One such night I will never forget was the performance of Keechaka Vadhom at a temple near . The main singer was the late Kalamandalam Unnikrishna Kurup. In Act II, before the raising of curtain, there is a Dhandagam or a verse in Sanskrit, followed by the lifting of curtains and Keechaka and Panchali appear and dance for the lines, ‘Harinakshi’. The Dhandagam or sloka, starting ‘Sabhajana vilochanai’ is a favourite among the buffs; and it was Unnikrishna Kurup’s best. The audience sat hypnotized, glued to the rendition. As the final notes sank to a stop, the audience reluctantly woke up from the trance. And then, a wonderful thing happened. In one voice, we demanded an encore. It was totally unheard of. Keechakan, played by the greatest living dancer, Kalamandalam Ramankutty Nair, was waiting in the wings. The organizers, succumbing to the demand, requested Kurup to sing it once again. Perhaps that was one unforgettable evening in Kurup’s life too. He sang again; and we, the blessed of the blessed, listened in rapture…

Later, Ramankutty Nair Asan wiggled his eyebrows and sang ‘Guaye…’ at Kottakkal Sivaraman looking cross and bitter, and asked her – ‘Come, Malini, come closer to me!’ ‘O jewel among women, come closer to me! Here, let me massage your worn feet! My humble abode has been blessed today by the touch of your lotus petal-like feet! Come and sit on this bed and let us make love!’

When I visited home at once in a month, I would go to my sister’s. My favourite niece, Malini, pretty as a picture and 5 or 6 years old, would open the door. I would strike a stance like Ramankutty Nair Asan and croon to her – Enn arukil varika nee, Malini!’ Malini, now 34 years old, Senior executive in a 5-star hotel and mother of a boy, would blush and grin happily.