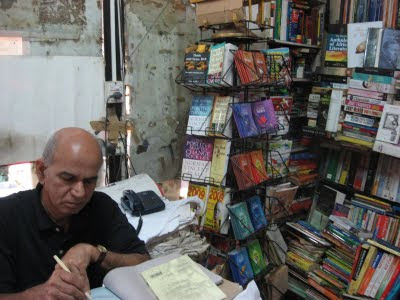 K and I stroll through . It is a national holiday but many shops are open. It is early afternoon; not much of a crowd. In the Eighties, I had been a frequent visitor to and my haunt was M G Road and its surroundings. I point out to K where my favourite pub, Ramdaa, used to be. Pub-hopping and browsing in that excellent bookshop, Premier, owned by Mr.Shanbagh, I used to spend many a memorable evening here long ago. At the first opportunity, I would barge into Premier and sigh deeply in contentment. Though there were other equally well-stocked booksellers like Gangaram’s and Higginbotham’s nearby, I preferred Premier, basically because of it variety, its ambience that was heightened by the presence of its owner, Mr Shanbagh.

There was hardly much space for the customers to move around. Yet how we loved to worm around among the disorderly kept stacks of books! Mr Shanbagh must have been in his mid-fifties in those days; he sat quietly near the entrance. He was a gentleman in every sense of the word and knew about or had read most of his wares. Often when Mr Shanbagh was free, I would discuss a new arrival with him. Those were the days prior to internet. Mr Shanbagh knew my interests and during the conversation he would suddenly perk up and say, ‘Ah! I would like you to take a look at this’ and pull out a book or two. At other times, I would read the blurb and ask his opinion. He would look thoughtfully away for a mite and would say – ‘Um- I don’t think you will like it’. Once, after spending more than an hour, I was disappointed to find anything that I liked; I told Mr Shanbagh so. He nodded sympathetically and said, ‘Don’t worry, it will come to you at the right time’. I accidentally leant on a revolving bookcase and a book fell down (See the picture! The bookcase!). I said sorry and picked it up – it was a book on environment that I had long cherished!

Premier is no more. I don’t know where Mr Shanbagh is now, whether he is still around or not. There was a post on him long ago in The Hindu. My frequency of visits tapered off and came to an end in the Nineties except for a one- day /two-day trip when I would be too busy for browsing.

At home, when I go through my library and pick a book at random, I see the legend beneath my scrawling signature – Premier, -/-/8-. Mr Shanbagh’s kind, quiet face comes back to me. The pleasant, cool evenings at come alive once again.

For me, heaven wasn’t far off.

Post Script ; Just before posting this, I googled Premier and came across this great blog http://isharethese.blogspot.com/2009/08/premier-book-shop.html. I have borrowed her photograph of Mr.Shanbagh. It was so wonderful to come across this blog and to discover kindred souls! Do visit the blog if you wish to know more about Premier. Thanks, Indrani!