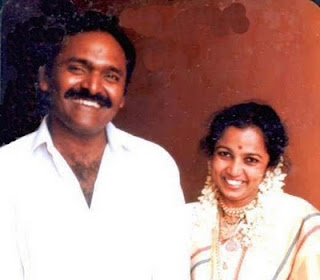 On the day of Onam, Anil had invited the two of us to his house for the feast. The feast (saddya) was secondary to Anil and me; we looked forward to spending some time together and of course, liven it up with a drink or two. P and I had planned to go in the morning itself so that P can assist C and Anil’s mother in cooking.

Then I discovered that my wallet is missing. The eternal scene once again erupted; rummaging, cursing, turning stuff upside down, intense effort to remember where I saw my wallet last. It didn’t turn up. Frantic calls to Credit Card, Debit Card, etc etc. I moan about the old, old 1 rupee, 2 rupees and ten rupees notes I had kept in my old, old wallet, photos of P and K. I curse the curse of old age and sigh. My Onam ruined with a capital R.

Then by 1100 hrs we get to Anil’s place. His first comment – “Well, well, well! Both in matching dresses!” P and I look at each other; I wearing a dark green shirt and the traditional dhothi (Mundu) and P in a traditional Kerala sari with dark green and gold borders and dark green blouse. We look at each other and laugh. It is an oft replayed scene, the coincidences of cohabitation. 21st year running.

Yesterday, the 26th August was our 20th wedding anniversary. Usually I have a nightmare trying to remember it. I get it confused among 20th, 23rd and 26th August. Last year in an effort to ensure that I won’t forget it, I bought a new watch for P and presented it dramatically – on 20th!!

With K away, neither of us was in a mood to celebrate the anniversary. I was not feeling well, so ‘the night in the forest’ idea was dropped. Finally we thought, OK, we will take a photograph and then have a dinner out. Evening came and we were too tired for a photo session. But we went to a quiet restaurant and had dinner together.

Over the ice-cream, I venture into my favourite hobby of mulling over the past. We concluded that our one mistake was that we never planned for the future; like, you know, 5 years hence, 10 years hence, 20 years. We lived as it came, day after day. Didn’t care to save much, had lots of fun. There have been many things we could have done, we should have done but never got around to doing it. There were opportunities missed and gone forever.

Sitting beneath the glass dome painted in beautiful patterns in mauve and red, Parvati and I gaze at each other and smile. Not much of a life, but hell, it had been our life and we haven’t made a big mess of it. A few dents here, a few scratches there, but no major disasters, touch wood, so far. Still there is a lot of affection, love and respect flowing between us. And of course, the comfort of knowing that there is another person around who cares about you.

Back home, with Sancho lying all four feet up between us, we watch something in the TV.

Our life is moving along.

Post Script: My wallet was there in the pocket of my trousers I wore the previous day, right where I had searched a dozen times! J