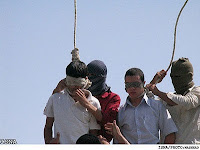 (Courtsey http://joshuapundit.blogspot.com/2006/04/open-season-death-squads-targeting.html)
(Gay individuals being hanged to death in Iraq)

Now that Delhi High Court legalized homosexuality and the news kept glaring in the front pages, it is with great relief that one can talk about homosexuality in public forums in . More than the legal sanction, the real impact of the verdict is on the lifting of the social taboo that had persisted since centuries in this country. For the ‘normal’ heterosexuals that formed majority of the population, the topic of homosexuality has been repulsive. Yet it had thrived all the while, from pedophilic priests to soldier bunkers, to nauseating public toilets, to the privacy of bedrooms and to pornographic sites in the Internet. Like the proverbial cat lapping up milk keeping its eyes shut, the society pretended ignorance.

I always sympathized with the transvestites, the effeminate, the social limitations of those people who preferred same-sex partners - the trauma of stigmatization they suffered has always struck a chord in my heart as it should for those who are deprived of freedom and liberty due to reasons beyond them. The mainstream society treats them with ridicule and contempt (there is a Malayalam movie, Chaandupottu, in which the hero is an effeminate male. While the tone is light humor, poking fun at him, one cannot forget the vicious undertones and thin borderline between fun and outright hostility) to rage resulting in physical abuse. I have observed many individuals, watched documentaries and read books depicting and defending the plight of this minority. As much as I empathize with them, sometimes I am unable to understand the need to centralize sex in their lives. I agree that sex is an integral part of life, yet to focus on it as if their survival depended on it seems to me a bit stretched. As one of the heterosexual crowd, I am sure I too will be ostracized if I projected my sexual needs in an uncontrolled manner.

In some instances, I have come to learn that heterosexual depravity has been the cause of resorting to homosexuality. In some cases among women, sexual abuse by men in a young age had turned them into lesbians. A majority might have genetic or hereditary disposition for their sexual preference. Many of the Hijdas (Indian community of transvestites) have been forced and physically tortured to become one as young children or youth. What I would like to underline is that there could be justifiable reasons for being different from the mass.

To take in the scene with a wide-angle lens, one should be liberal and broadminded to accept the innumerable, irreversible deviance that exists in human society. Deviance from the mainstream, socially accepted culture and practices should not be condemned so long as it does not infringe upon others’ right to live in peace. This broad vision should include not only humans, other cultures and other religions but other species also, including plant and animals, with love and tolerance that collectively would radiate beyond the confines of the planet to the entire Cosmos, of which we all are part. It is not a utopian fantasy, but a reality that can be strived for.