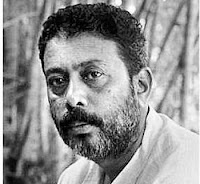 I lost a friend yesterday. Saratchandran. Sarat was a documentary filmmaker. His interests were environmental and social issues. More than that, he was one of the few who persevered in the cause of nature conservation in Kerala. Through his documentaries on , Attapady, , Plachimada Coca-Cola and several others, Sarat tried to make people aware of the issues. Through his touring film festival he called ‘Nottam’ ( Look), Sarat went up and down the state and even outside the state with his collection of documentaries ( made by others too) showing them at schools and other gatherings.

Though I had known Sarat for a long time, more than 20 years, we met only infrequently. Sarat came to see me a couple of months back. He had come to to attend the Film Festival. Hugging and kissing me, Sarat recollected our few journeys together, discussed his new documentaries and said that he had this sudden urge to see me and that’s why, drunk at a late hour, he had barged in. He had a great baritone and spoke well. I have seen several men of my generation succumbing to alcohol. It is my nature not to be critical or judgmental, but to witness the deterioration of their faculties, the transformation from brilliant, energetic minds to a dull, slobbering souls was sad. I enjoy my dollop of whisky, but I make sure they remain dollops.

Day before yesterday, while traveling by train late in the night, Sarat slipped as he tried to hold to another man who was about to fall. Both fell and died. Knowing him, I could see him doing that, risking his life for another. Looking at Sarat lying in the deep freezer of the mobile mortuary reminded me of my mango tree. I was like a green leaf watching another being taken away by the wind. Sorrow welled up in me as I watched Sarat’s mother calling out to him, asking him not to go away.

Yesterday late in the night, I googled Sarat. His film company, Third Eye Films, has a website. He has a Facebook page. I looked at it and realized he would never be there to attend to my ‘friend request’. But I sent him one, anyway. Who knows, he might reply. I sent him a message – ‘Goodbye, Sarat. You will always be in my thoughts’.

Now, at 1000hrs, his body would be being lifted up from his house for his last journey to the crematorium. Within an hour, Sarat would become a handful of ash and bones. Later he would come occasionally, like reflections in the water, and leave when I sigh.